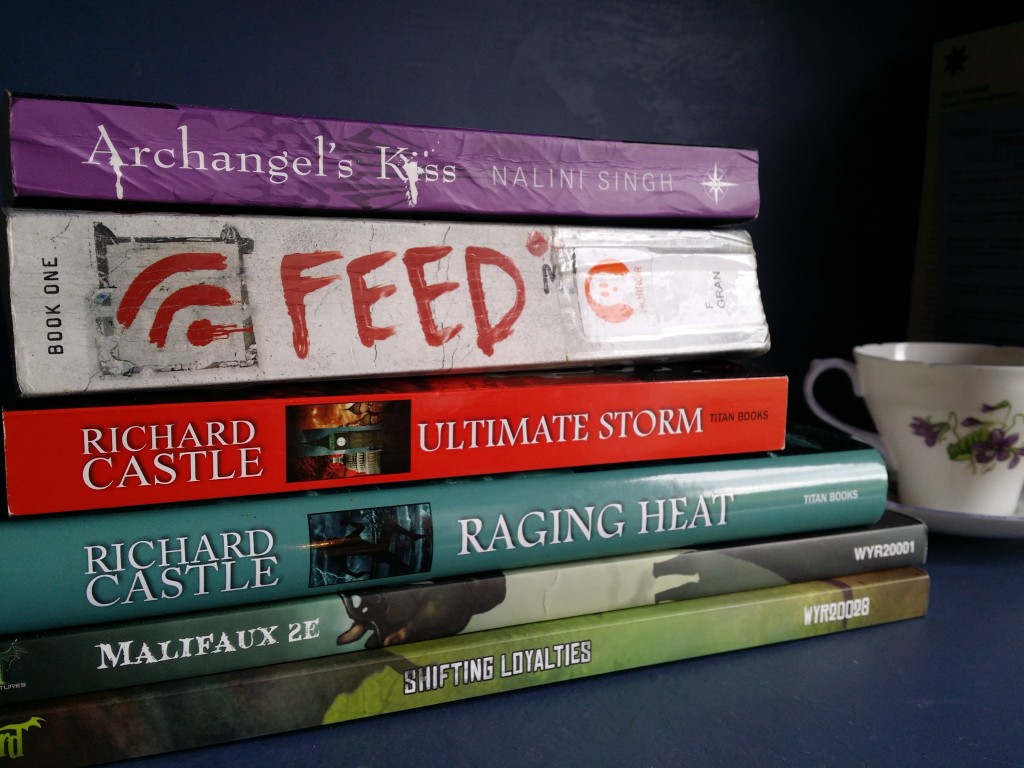 As expected, October saw a bit of an influx of books, partly thanks to the dealers’ room at Conflux… though I also need to stay away from NetGalley for a while. It’s a good thing Dewey’s read-a-thon took place this month or the damage might have been worse.

64. Ultimate Storm by Richard Castle. An omnibus of the Derrick Storm action/mystery novels supposedly written by the fictional character Richard Castle. The Nikki Heat series hasn’t been too bad, but this was dreadful. Cardboard characters, clunky dialogue and no concept of when to italicise internal speech.

65. Archangel’s Kiss by Nalini Singh. I didn’t enjoy this quite as much as Angels’ Blood due to the story’s lack of focus. Still, an entertaining urban fantasy with some nicely cinematic writing and epic moments.

66. Malifaux 2E by Wyrd Games. The second edition of the core manual. They’ve done a great job of updating their look; the artwork is gorgeous. Nice to see they’ve made independent new factions for the Gremlins and the Ten Thunders. Even the stories seemed punchier.

67. A Talent for Trickery by Alissa Johnson. Reviewed here.

68. A Trifle Dead by Livia Day. If you like your contemporary mystery novels in vintage fashion and with a predilection for sweet treats, this is just the book for you. I loved the Tasmanian setting. The love triangle between the passionate police officer, the sexy Scotsman and the main character didn’t hurt either.

69. Loving the Prince by Nicole Murphy. A sci-fi romance between the heir to the throne and her bodyguard. I appreciated the fact that even though Cassandra is the Rican heir, she’s also a no-nonsense business woman. In a nice reversal of gender roles, it is her bodyguard Kernan looking to settle down and start a family.

70. Raging Heat by Richard Castle. This was somewhat of a relief after the Ultimate Storm garbage. A much more engaging read.

72. Feed by Mira Grant. Zombie novels aren’t usually my thing, but this one had me hooked. More sci-fi than horror and ended with a twist I did not see coming. Recommended.

Malifaux: Shifting Loyalties by Wyrd Games
The Time of Ghosts by Gillian Polack
Damnation and Dames edited by Liz Grzyb and Amanda Pillar
Hear Me Roar edited by Liz Grzyb
Death at the Blue Elephant by Janeen Webb
The Blackmail Blend by Livia Day

Game Theory Ch 1-11 by Pia Foxhall. A precursor to The Court of Five Thrones. I was somewhat astonished to find it starts out even darker and I was more at ease once it took up hurt/comfort dynamics.