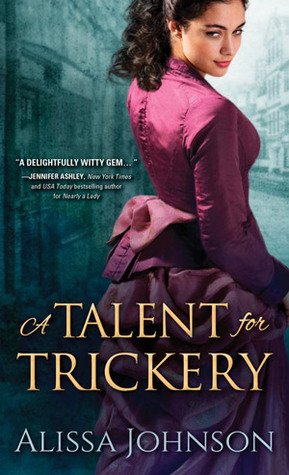 Years ago, Owen Renderwell earned acclaim–and a title–for the dashing rescue of a kidnapped duchess. But only a select few knew that Scotland Yard’s most famous detective was working alongside London’s most infamous thief–and his criminally brilliant daughter, Charlotte Walker.

Lottie was like no other woman in Victorian England. She challenged him. She dazzled him. She questioned everything he believed and everything he was, and he has never wanted anyone more. And then he lost her.

Now a private detective on the trail of a murderer, Owen has stormed back into Lottie’s life. She knows that no matter what they may pretend, he will always be a man of the law and she a criminal. Yet whenever he’s near, Owen has a way of making things complicated–and long for a future that can never be theirs.

I got off on the wrong foot with this book, finding the style a little overwrought to begin with. While introductions may be necessary, it should not take eight paragraphs to knock on a door. Fortunately, it settled down somewhat and the characters quickly won me over.

Both Lottie and Owen possessed character traits I adore. Lottie is an intelligent, strong-willed woman. She loves a puzzle and will keep working away at it until she puts the pieces together. Family is the centre of her world and she goes to great lengths to keep them safe, even risking her personal safety and her relationship with other family members. Her intentions are good, but she’s used to being in charge and doesn’t always go about things in the best way. I get really annoyed when the characters in a story are always right, so it was nice to see Lottie make mistakes. Not only that, she owns up to them–at times a little more quickly than I had expected.

Owen is a former police-officer-turned-private-investigator. Unsurprisingly, he is driven by duty. He has been in love with Lottie for a long time, but it was nice to see she wasn’t his sole preoccupation–there were still times when duty had the biggest claim on his attention. Despite his upright nature, he also has the capacity to be flexible, which saved him from turning into a pompous ass.

Lottie’s sister, Esther, was a bit more wobbly for me. I found it hard to reconcile her sharp edges with her desire to be thought of well by everyone. It makes sense in terms of her background but I don’t feel the story quite carried it off. However, I very much enjoyed her dynamic with Samuel, one of Owen’s trusty sidekicks, and anticipate they will be the subject of the next book in the series.

Although A Talent for Trickery has a bit of a mystery component to it, its strength really likes in the romance between Lottie and Owen. Overall, I found it a light, fun read.