Conflux 11 took place from Friday 2 October until Monday 5 October. As is always the case, there was a lot of good programming to see, so I had to split my report into two parts. You can read the first part here.

I was fortunate enough to sit on a couple of panels throughout the convention. The highlight of these for me was the panel called Editing Your Own S**t, which ran on Sunday. There was a great diversity of experience on this panel. Jo Clay spoke as an emerging author and had a fantastic list of words she overuses in her own work (and now carefully edits out). At the opposite end of the spectrum was Sean Williams, who has published around 30 books, including a number for the Star Wars franchise. Sean spoke of the fatigue in doing final edits on one novel when he really wants to be diving into writing his next new one. Karen Simpson Nikakis offered an interesting perspective, having moved from a big publishing house to self-publishing. Finally, Abigail Nathan doesn’t edit her own work at all–she works as a freelance editor and owner of Bothersome Words. She named several tools and programs that had the other panel members grabbing for their notepads.

Another highlight of the Sunday program was the Paying for Our Passion panel. Based on David McDonald’s series of guest posts (which I highly recommend), the panel discussed the sacrifices they have had made in order to pursue writing or editing. David moderated the panel, speaking of how touched he had been by the response to his series and the heartfelt contributions he’d received. The panel was likewise intensely personal, with panel members opening up about some of the struggles they have faced. Tehani Wessely spoke about sacrificing time with her family in order to run FableCroft Publishing. It brought her a lot of guilt, but at the same time she hoped she was being a good role model for her kids by pursuing this passion. For Maureen Flynn, writing is a lifeline as she has struggled from a very young age to be the primary carer for two family members. Like Tehani, she feels guilty for taking the time to pursue her writing, but is also aware that it is crucial for her mental health. There was so much interesting discussion in this panel that I don’t have room to do it justice, so I’d urge you again to check out David’s series.

By Monday, I was well and truly flagging. September had been a demanding month and my energy reserves were almost out. I spent a lot of time pursuing the time-honoured convention tradition of hanging out with friends (both new and old) at the bar. However, I did manage to sit in on the alternative publishing panel. Small press was included as an alternative publishing option on the basis that in Australia small press really is tiny. Where small press in the United States might manage a print run of 20,000 copies, most Australian small press consider selling 500 copies a success. Self-publishing offers a lot of flexibility that might not otherwise be available. Marisol Dunham spoke of her 14,000-word novella that she struggled to get published. It received excellent feedback from publishers but the size made it an awkward fit for pre-existing categories among the large publishers. Tehani also pointed out that alternative publishing options (including small press) are helpful for getting an author’s back catalogues into print once again. For example, FableCroft Press published Flower and Weed, a spin-off from Margo Lanagan’s Sea Hearts.

However, the drawback of alternative publishing is finding an audience. It is difficult to distinguish oneself from the crowd, especially when the crowd just keeps getting bigger. The need for reader reviews on sites like Amazon and Goodreads was mentioned a number of times. Self-promotion is something that doesn’t come naturally to many writers–and the need to promote one’s work is becoming increasingly necessary for writers published by traditional publishers, not just those pursuing alternative avenues. 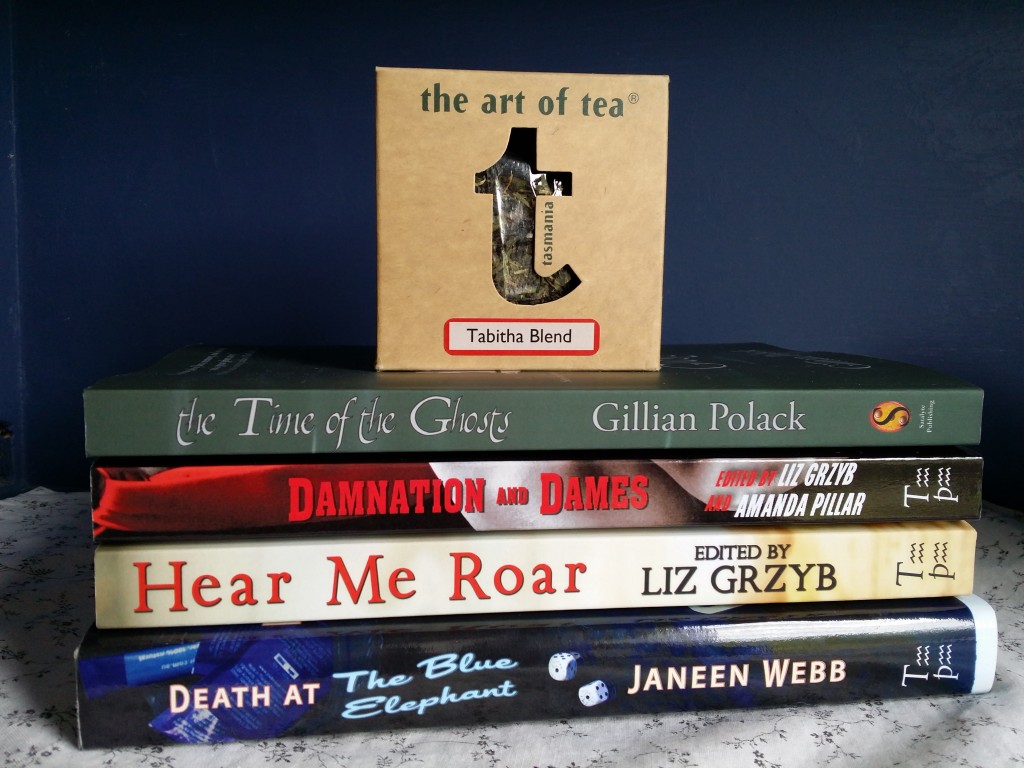 Any convention would not be complete without a trip to the dealers room. My haul this year was surprisingly modest, though Ticonderoga Publications did particularly well out of me. I picked up three of their books: a collection of Janeen Webb’s stories called Death at the Blue Elephant and the Hear Me Roar and Damnation and Dames anthologies. Conflux is also a prime time for book launches. Throughout the weekend I attended Satalyte Publishing’s launch of The Time of the Ghosts by Gillian Polack, FableCroft Publishing’s launch of Dirk Flinthart’s collection Striking Fire, the CSFG’s launch of The Never Never Land anthology and Ticonderoga’s launch of the Bloodlines anthology and The Year’s Best Australian Fantasy and Horror 2014.

After all that, I didn’t quite make it to the Closing Ceremony on Monday evening. However, I made sure the first thing I did when I got home was to book tickets for Conflux 12. I had such a wonderful time catching up with old friends and making new ones that I wouldn’t want to miss out on the next time.