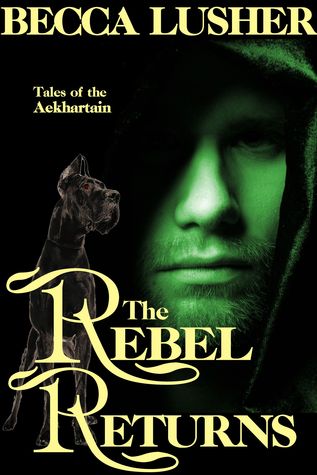 Disclaimer: The author is a friend. I have done my best to give an unbiased review. This review contains spoilers for previous books.

Nawaqu Caligo may have fallen, but his struggle goes on. Stranded on a remote world with only loyal Noctis for company, Caligo is changed but not defeated.

The road ahead is long, full of shadows and loss and regret. Can he find a way to free himself from thoughts of blood and revenge, or is he doomed to repeat the mistakes of the past?

The darkness is coming and this rebel’s fight is far from over yet.

After defying Mask and using his Aekhartain powers against the Saxon army, Caligo finds himself stripped of his wings and banished to another, barren world. His loyal buzzard Noctis has likewise been stripped of his avian form and is now grounded in the form of a giant black hound. It is this punishment most of all that Caligo cannot forgive.

I found it interesting to read a story largely from the villain’s perspective. Because Nawaqui is definitely a villain now. Where before he might have been perceived as misguided and his reasons understandable, he descends into villainhood by refusing to take responsibility for his actions. This transition takes place in an isolated environment and is therefore dealt with narratively by utilising a split personality. Caligo tries to hang onto his humanity while Nawaqui seeks to embrace the darkness. There was a similar feel to the depiction of Gollum in Peter Jackson’s Lord of the Rings films. A repetitious inner dialogue blames the loss of Caligo’s wings on the other Aekhartain (“it’s mine, they stole it from me,”) and his love/hate dynamic with them is similar to that between Gollum and the hobbits.

This transition lasted perhaps a little longer than I was comfortable with but the story recovers nicely by moving into a more dynamic phase. Shaiel and Demero return and we get to see a little of how Caligo’s betrayal has affected them.

But the real star of the show is Noctis. It is clear the author has dogs of her own because Noctis’ canine characterisation is spot on; I often smiled, having seen similar behaviour in my own dogs. His easy change of form makes an excellent foil for Caligo’s internal struggle and his loyalty to the Aekhartain of Shadows went straight to my heart.

Demero also provided an excellent foil for Caligo. They are shown as two sides of the same coin–of near identical backgrounds but very different outlooks. This theme, started in The Dark Rebel and strengthened in The Rebel Returns, provided the basis for a strong and emotional ending.

Overall, I found it a slightly stronger book than The Dark Rebel, and one I thoroughly enjoyed. The Dark Rebellion duology has opened up a number of avenues for more Tales of the Aekhartain and I can’t wait to see what will be next.