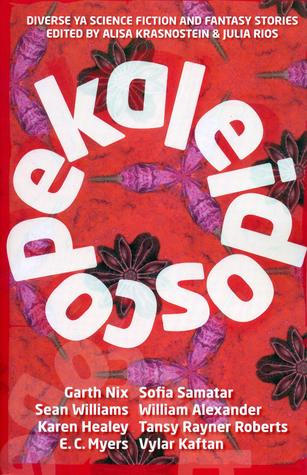 In April, Kaleidoscope won both the Ditmar Award and the Aurealis Award for Best Anthology and I can see why. Not only does it do some wonderful things with representation, all the stories are of excellent quality. As with any anthology, there were a few stories I was less keen on, but that was mostly a matter of personal preference.

Diversity is at the heart of this anthology in a number of ways. There are queer characters, characters who use wheelchairs, characters dealing with depression and chronic illnesses, characters from a range of ethnic backgrounds. In some cases the diversity is intersectional. For example, Faith Mudge’s Signature features Priya, a wheelchair-using protagonist who has brown skin. However, the characters’ diversity tends not to be the focus of the story. To continue with the example of Signature, the story is about several characters who are caught in Faustian Bargains that have just come due. The diversity of the characters in this story is completely incidental to the plot–a part of who they are but not the whole of who they are. I loved this about the anthology.

Diversity also manifests in the tone of the stories, allowing for a nice range. Some of them were a little bit dark (Kiss and Kiss and Kiss and Tell by E.C. Meyers), some were heartbreaking (The Day the God Died by Alena McNamara). Others were fun and full of hope (Cookie Cutter Superhero by Tansy Rayner Roberts, Signature). I was pleased to see some magic realism included along with more traditional fantasy and science fiction. Ordinary Things by Vylar Kaftan hardly reads as speculative at all, while in Krishna Blue Shveta Thakrar uses magical realism (and some gorgeous language) to excellent effect. Of them all, Careful Magic by Karen Healey was my favourite. In this magical society, magic users declare themselves for Order or Chaos. Helen is a rare Order magic user and one who lives with Obsessive-Compulsive Disorder. One day her careful routine is interrupted by a classmate who needs help lifting a love spell.

One concern I had about the anthology was the use of the descriptor “disabled” on the back cover. I had been under the impression that this was offensive (or, at the very least, distasteful) to certain parties and could serve to undermine the anthology’s intended purpose. If any readers have thoughts on this topic, I would love to hear them, especially because this is a trend I have noticed continuing in the promotional material for Defying Doomsday.

However, overall I found Kaleidoscope an excellent anthology and well-deserving of the awards it has received.