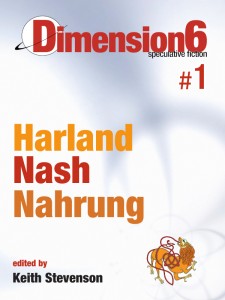 Dimension6 is a new electronic publication that was launched this year by Keith Stevenson of coeur de lion publishing. There are three issues a year, each featuring three short stories. This inaugural issue contained Ryder by Richard Harland, The Message by Charlotte Nash, and The Preservation Society by Jason Nahrung.

Ryder is set in country New South Wales during World War 1. Sally has come from Sydney to stay with relatives in safety. However, she’s soon bored out of her mind and finds herself drawn to Ryder, the town’s mysterious bad boy. This story was the wrong way to start off the collection for me and was almost enough to make me put the whole thing down. Although the premise was interesting, I didn’t feel there was enough done with it to justify the story. I also found the characters thoroughly unlikeable and the implications of the ending rather uncomfortable, though the story itself was reasonably well-written. It was disappointing that the author loci included afterwards only related to the story in the most distant of ways.

Charlotte Nash’s The Message more than made up for this disappointment. Set in the post-apocalyptic future, it tells the tale of a hunter who is sent into the dangerous urban wilderness to deliver a message to the enemy. Again, it had an interesting premise and one that seemed distantly related to Ryder. The story’s twists and shifts kept me on my toes, creating excellent tension. It was definitely my favourite story of the collection. I notice that Nash also wrote Ghost of Hephaestus in Phantazein, one of my favourites in that anthology. The Message has confirmed she’s an author I’m going to be watching out for.

The Preservation Society was a bit of a change after the two sci-fi stories. Set in Queensland, a human woman is auctioned off to a group of vampires. Horror isn’t generally my thing, but The Preservation Society did such a great job of focussing on its characters that it never left me feeling out of my comfort zone. In fact, the last line had me chuckling a little. The ending wasn’t too difficult to spot, but well worth the ride. Australian vampires are a preoccupation for Nahrung and he does it well.

Based on this first issue, Dimension6 is a market to keep your eye on if you’re interested in dark, spec-fic short stories. All issues are available for free at the publisher’s website.