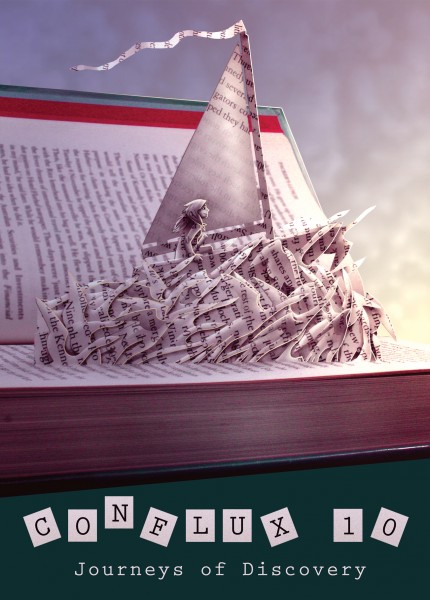 Earl Grey Editing took a bit of a break over the last week so I could recover from attending Conflux 10. As I have mentioned before, Conflux is a speculative fiction convention and this year it ran from Friday 3 October until Monday 6 October.

While not exclusively aimed at authors, it does have a heavy focus on writing. This was particularly evident on the Friday, with most of the programming devoted to workshops. I ran one on working with editors. It examined the difference between freelance and in-house editors, and offered some tips on the best ways of working with each. I received some positive feedback from  participants and may consider running it again in the future.

After an all-too-brief lunch break, I attended a workshop by Karen Miller on character development. Karen’s background in theatre was strongly evident. She urged participants to fine-tune their ear for dialogue by reading scripts and pointed out that good-quality director’s commentaries can make great writing master classes. Karen was very generous with her time and attention, inviting us to email her with any of those belated questions that might pop up after we’d had a chance to process the workshop. She also raffled off several copies of her newest book The Falcon Throne. I didn’t come away with one of the books, but I did end up with some thoughts on my Work In Progress.

The pace picked up on Saturday with the arrival of those attendees who’d had work commitments the previous day. A highlight for me was Margo Lanagan’s Guest of Honour interview. She talked about the journey her writing career had taken from poetry through teenage romance, children’s fantasy, gritty realist YA and then to speculative fiction. She was even kind enough to share some of her early poetry, at one point laughing too hard to finish reading. What I appreciated most was hearing about how much she struggled with her writing, in particular moving from the critically acclaimed short story Singing My Sister Down and into novels. In the end, she tricked herself into it by writing Tender Morsels as a series of linked short stories.

The panel on editing anthologies was an obvious choice for me to attend. Between the panellists, there was an impressive range of experience. It was especially interesting to hear Jack Dann speak about the changes in the publishing industry. For most of his career, publishing an anthology relied on getting big names and being accepted by big publishing houses. He was of the opinion that the rise of e-publishing has made the industry more flexible (at least in some areas) and allowed more of a place for small press. Tehani Wessely of FableCroft Publishing provided an excellent example. Her anthology of fairytales, Phantazein, was launched that afternoon. At the panel, Tehani spoke of how the stories for Phantazein had been submitted for an unthemed anthology she was editing called Insert Title Here (which is to be launched next year). She had loved the stories but felt that having them all together in an unthemed anthology would unbalance the book, so she decided to create a new anthology just for the fairytales.

Book launches are a key part of Conflux. In fact, I think I attended as many launches on Saturday as I did panels. As well as the Phantazein launch, I also attended launches for Shatterwing by Donna Maree Hanson and Bound by Alan Baxter. Sunday was the launch of Langue [dot] doc 1305 by Gillian Polack. I still missed launches for Jubilee by Jack Dann, Difficult Second Album by Simon Petrie and The Shadow Master by Craig Cormack. I know I wasn’t the only one wishing for a Time Turner that weekend.

Sunday highlights for me included Alisa Krasnostein’s Guest of Honour interview. Alisa came across as very practical and business-minded, somewhat of a contrasting voice at the convention. Her interview covered the history of Twelfth Planet Press and the evolution of Kaleidoscope, an anthology funded through Kickstarter featuring protagonists from diverse backgrounds. She hopes to do a sequel sometime in the future.

Another panel of particular interest to me was about reviewing. It had me considering my approach to reviewing on this blog and I plan to post some more detailed thoughts on this at a later date.

Having attended the banquet on Sunday evening (where guests were taught some basic Bollywood dance moves), my energy was well and truly flagging by Monday. However, I managed to make it in early to see the panel on gender and diversity, where Ancillary Justice by Ann Leckie got some excellent press and convinced me to put it on my list of books to acquire (yep, I’m a little late to the party on this one).

In the afternoon, Gillian Polack gave a talk on the differences in perspective brought to history by writers and historians. Writers tend to make generalisations too broad to be accurate or be asking questions so specific they can’t be answered by historians. The level of accuracy a story needs depends on the genre. Gillian suggested picking a historical time and place to research and then use genre to determine the telling detail.

With many attendees already on their way to the airport, the closing ceremony was somewhat more subdued than the opening ceremony had been. I was delighted my story Deathwisher was a runner up in the short story competition, losing out to Death Watch by Rob Porteous and Stripped by Nicole Murphy (you can tell from the titles we’re a cheerful lot). The E. G. Harvey Award for Australian SF Art was awarded to K.J. Bishop for her gorgeous brass sculptures (which I’d drooled over at the art show).

Overall, I had a wonderful time and I’m definitely planning to return next year.

One thought on “Convention report: Conflux 10”