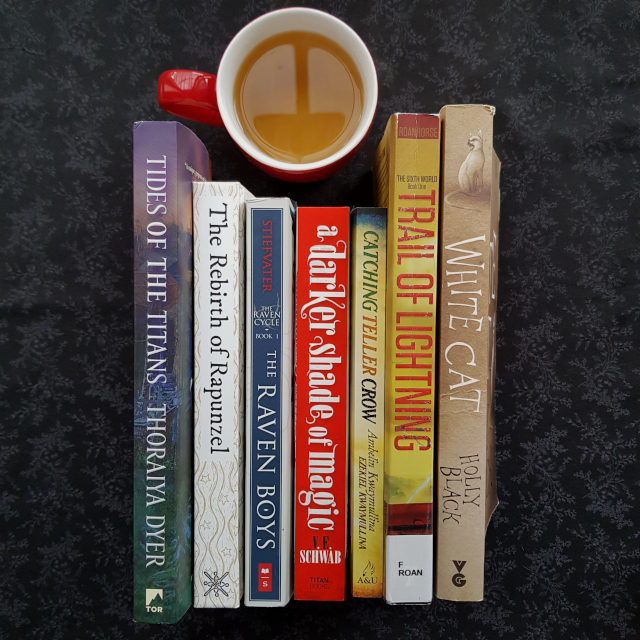 April generally sees a spike in my reading, in part due to Dewey’s Readathon (there’s a corresponding spike in October, when the readathon also runs). This year’s spike is a bit bigger than usual, as I never quite slowed down after the readathon was over.

Tides of the Titans by Thoraiya Dyer–For review at EGE. DONE!

As expected, the Hugo shortlists were announced just a couple of days into the month. I was pleased to have already read most of the Best Novel category, half of the Best Novella and Best Series categories, and most of the Lodestar nominees. The remainder became a priority as I got my hands on them.

75. The Tea Master and the Detective by Aliette de Bodard. Science fiction novella, 2019 Hugo nominee. An eccentric scholar hires a semi-organic spaceship to retrieve a corpse for scientific study, only to discover the corpse was a victim of foul play. This Sherlock-Holmes-inspired tale does a wonderful job of walking the line between being faithful to its source material while still managing to bring a fresh spin to it. However, the mystery and the world-building elements sit a little uneasily together.

76. A Darker Shade of Magic by V.E. Schwab. Fantasy. A magician with the ability to walk between alternate worlds teams up with a thief to prevent their worlds from being destroyed. While I very much enjoyed the book–particularly the alternate versions of London–overall I found it more style than substance.

77. Deacon by Kit Rocha. Dystopian romance. Second in the Gideon’s Riders series. Ana is the first woman to be part of the Riders and she’s aware she carries the hopes and dreams of a generation of young girls. There’s no way she wants people to think she only got there because she slept with the boss. However, her attraction to Deacon is hard to resist. I really loved how this book delved into the pressure put on trailblazing women. Ana is a wonderful mix of fierceness and kindness.

78. The Cybernetic Tea Shop by Meredith Katz. A gentle love story between an AI technician and a 300-year-old robot who runs a tea shop. It delves into violence against the marginalised, but remains a very sweet tale.

79. Tides of the Titans by Thoraiya Dyer. Reviewed here.

80. Crooked Kingdom by Leigh Bardugo. Read for the LDUH book club. Fantasy YA. Second in the Six of Crows duology. Kaz Brekker and his crew fight to rescue one of their own and enact revenge. The first book gave me all the Blades in the Dark feels and this one even more so. I really enjoyed seeing more of Ketterdam and the crew in their native habitat. However, I had a few quibbles about some of the relationship dynamics and was disappointed that the female characters remained so significantly outnumbered.

81. Artificial Condition by Martha Wells. Science fiction novella, 2019 Hugo nominee. Second in The Murderbot Diaries. Murderbot returns to the site of the massacre it doesn’t remember committing. I continue to love the voice of Murderbot and was delighted to see it team up with ART–who, despite not having a good grasp of emotions, makes a remarkably deft psychologist.

83. Repeat by Kylie Scott. Contemporary romance. After a vicious attack leaves Clementine with amnesia, she reconnects with her ex, Ed, in the hopes of discovering more about her life. While Kylie Scott’s earlier work was fun, her more recent stuff (such as Trust) has delved into some meatier issues in a way that is very satisfying. Although I’m not the best judge, it seemed to me the amnesia angle was handled in a way that was sensitive and thoughtful, exploring the ways in which it may lead to someone becoming a different person.

84. The Raven Boys by Maggie Stiefvater. First book in The Raven Cycle. Contemporary fantasy. A teenage girl foretold to bring death to her true love falls in with a group of rich boys on a quest to discover the final burial place of a Welsh king. This has a wonderfully tense and creepy atmosphere at times, but it was the relationships that made it for me.

85. Kalpa Imperial: The greatest empire that never was by Angelica Gorodischer, translated by Ursula K. Le Guin. Read for the Lady Vaults book club. A series of short stories about the emperors of a mythic kingdom. Although well-written, it wasn’t really for me. I kept expecting to see connections between the stories but never really did, and there was no real sense of a chronology. There was also a bit of distance in the telling that kept me at arms’ length from the characters. The women were generally prostitutes or empresses, or both.

86. Trail of Lightning by Rebecca Roanhorse. Dystopian fantasy, 2019 Hugo nominee. First in The Sixth World series. A monster-hunter teams up with a medicine-man-in-training to uncover the truth behind a series of attacks. Pretty standard urban fantasy, though the Native American setting and cast brought a new spin to the genre. It was also good to see some advocation for healthy relationships.

87. The Rebirth of Rapunzel: A mythic biography of the Maiden in the Tower by Kate Forsyth. The first section of this nonfiction book is a PhD thesis which traces the origin and evolution of the famous fairy tale as well as the influences on Forsyth’s own retelling Bitter Greens. The second section is a translation of one of the versions Forsyth found most influential. And the last section is a collection of related articles and essays by Forsyth. This last section suffered a bit from a repetition of material, as is often the case in such collections of nonfiction essays. However, on the whole, the book was quite interesting and does a wonderful job of unpacking some of the symbolism connected with the fairy tale.

88. White Cat by Holly Black. Contemporary fantasy. First in the Curse Workers trilogy. Cassel Sharpe comes from a family of curse-workers and con artists. Being the only non-curse-worker, he’s done his best to go straight, attending a prestigious private school. However, his careful life starts to unravel when he wakes up one night to find he’s sleepwalked onto the roof of his school. I quite enjoyed the world-building in the story and the association between magic and the Mob. Unfortunately, the story didn’t do much for me. Holly Black doesn’t really do purely likeable characters, but I found Cassel rather dull. For all his nous as a con artist, he was remarkably slow on the uptake at times. I usually love the author’s work, but I won’t be continuing this series.

89. Starfarers by Vonda M. McIntyre. Science fiction. First in the Starfarers Quartet. Victoria Fraser Mackenzie is set to lead the first expedition into another solar system in the hopes of making alien contact. However, political opposition means the expedition may not even get off the ground. It was wonderful to see a cast with so many women. It rather highlights how much we’ve backslid since 1989. I also enjoyed the sea-space connection. Given the strong focus on politics, some readers are going to find it a slow story. However, I found it had some pertinent parallels to current political situations.

Galentine by Jodi McAlister. A prequel to the Valentine series. It’s tough sharing a birthday with three other people, but fortunately for Pearl her best friend Phil has got her back.

This post will be the last TBR report I make at EGE for the foreseeable future. But while the blog may be wrapping up, my reading plans certainly aren’t. Definitely on the agenda for May:

Black Wolves by Kate Elliot. I’d like to get through this before seeing the author as GoH at Continuum in June.

Masks: A New Generation by Brendan Conway. This is a tabletop roleplaying game about superheroes that my local group is set to start this month. It would be useful to have read the rules first.

The Ditmar shortlists have also been announced, so I’ll be aiming to get through as much of that as possible in order to vote. Between this and the Hugo shortlists, I’ll have my hands full.