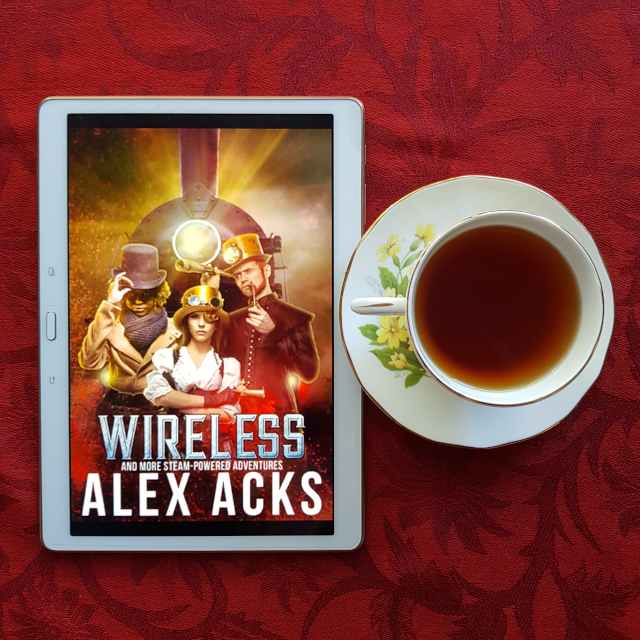 Captain Marta Ramos, the most dangerous pirate in the Duchy of Denver, is back and she and Simms are up to their goggles in trouble. Has General del Toro found a way to use the Infected as an army and can Captain Ramos work with her arch enemy, Colonel Geoffrey Douglas, to stop him? Can Simms join forces with the devious Deliah Nimowitz on a jailbreak, some sewer misadventures AND a high society soiree involving tea, a heist and sausages? And what about the Rail King and his nefarious plans? Can Captain Ramos and her crew stop him before he completes his latest dastardly deed, one that may result in Deliah’s demise? Check out the next installment of the exciting adventures of Captain Ramos and her valiant crew to find out more!

Wireless picks up where Murder on the Titania and Other Steam-Powered Adventures with 3 linked novellas, all set in or near the Duchy of Denver, in an American West that never was.

I was absolutely delighted by Murder on the Titania when I read it last year, so I jumped on the chance to review the sequel Wireless and More Steam-Powered Adventures. This proved to be a wise move because I found Wireless to be equally enthralling.

The book comprises of three novellas, making the structure of the book somewhat different to Murder on the Titania. Where the former was mostly discrete short stories, the novellas in Wireless are more tightly linked. I found this very satisfying because it allowed a deeper dive not only into the characters and their relationships, but also into the world itself and how it may be changing. It does mean that the stories lose a little of the self-contained, Holmes-inspired mystery structure, but I found this a feature rather than a bug, and there remained enough mystery to keep me curious and engaged.

The cast of this series has always been reasonably diverse; one of the things I liked most about Murder on the Titania was its inversion of the racist and sexist stereotypes present in the work of Agatha Christie and Sir Arthur Conan Doyle. Wireless builds on that by introducing the Native Americans of this alternate America. They play a prominent role in the first story, Blood at Elk Creek, in which it becomes apparent that the nefarious General del Toro is testing out a way to control the mindless Infected by directing them to attack Lakota settlements. While I’m not the best person to judge, the representation of Native Americans seemed to be handled with respect, showing them neither as mystical guides or as ignorant savages (except when they choose to play to that stereotype for their own reasons). Colonel Geoffrey does hold some bigoted views, but he is nicely balanced out by Captain Ramos, who is more open-minded and willing to make friends. This is reinforced in Wireless, where we see a Native American engineer stepping in as a permanent part of the crew.

The first and last stories are more thematically similar, sharing a thread about powerful men abusing their power. Blood at Elk Creek looks at this in a broader way, being more focused the oppression of a group through the lens of racism. Wireless brings it down to a more individual level. There are overtones of sexism that it touches on, but it also recognises men are likewise victims of abuse and toxic relationships. It digs into shame and the ways the victims can be made complicit in the abuse of others. This was handled in a way I felt was sensitive and sympathetic. Both stories touch on issues of justice, looking at where society fails in that regard and whether an individual can step in when the system fails.

The second story, Do Shut Up, Mister Simms, is a light-hearted foil to the more serious stories. Running concurrently with Blood at Elk Creek, it shows how Mister Simms has his hands full keeping the crew out of trouble while Captain Ramos is away. When one of the crew is caught and imprisoned, he’s forced to call upon the help of Deliah Nimowitz, a cunning lady with her own agenda and a soft spot for Captain Ramos. It touches on the unconventional relationship between Deliah and Captain Ramos, a thread that then becomes important to Wireless.

I mentioned in my review of Murder on the Titania that I would have liked to see a bit more of the crew. Wireless in particular delivers on this, diving into the backstory of one of the crew. It was also delightful to see Mister Simms renew his acquaintance with Chippy, Deliah’s dog, and the two make for an adorable comedic duo.

The action sequences throughout the collection are tense and well-paced, keeping me glued to the page.

Overall, Wireless and More Steam-Powered Adventures was as fun and engaging as its predecessor. I will be keeping an eye for more adventures from Captain Ramos and her valiant crew in the future.