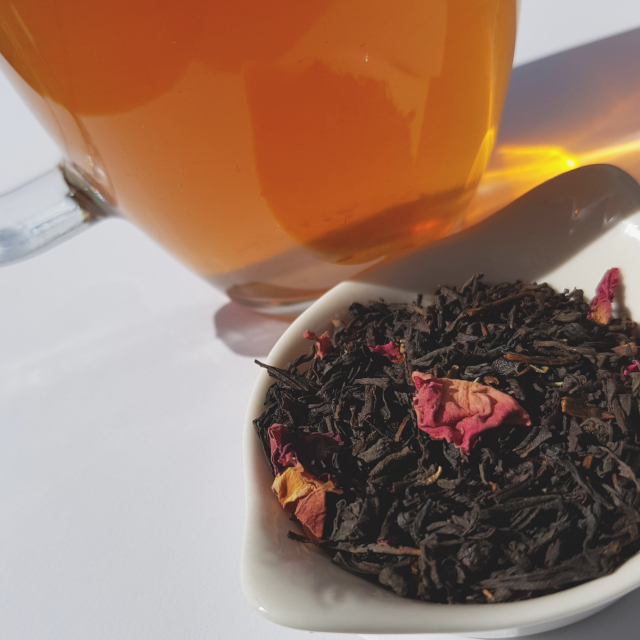 Loose-leaf Links is a feature where I gather together the interesting bits and pieces on sci-fi, fantasy and romance I’ve come across and share them with you over tea. Today’s tea is Canberra Breeze from Adore Tea. I’m still not sure how I feel about this one. It’s a blend of caramel, berries and rose, with the latter two being the predominant tastes. I’m fond of rose teas, not so much of berry teas. The disparate tastes didn’t make a great first impression, but it’s growing on me. It goes nicely with raspberry jam on toast.

It has been quite a while since my last Loose-leaf Links post and I have been keeping busy with The Skiffy and Fanty Show in the meantime. I managed to interview Stephanie Gunn about her sci-fi novella Icefall (which was one of my favourite reads of last year). I also teamed up with Jen Zink to interview Celine Kiernan, author of Begone the Raggedy Witches (a fabulous MG fantasy which convinced me I need to check out more of Celine’s work). And for Skiffy and Fanty’s Month of Joy, you can find me over on their YouTube channel visiting the koala enclosure at the Tidbinbilla Nature Reserve.

Kat Clay, co-founder of the Australian Science Fiction and Fantasy Writers’ Association, showed her genre talent at the Scarlet Stiletto Awards back in November. The awards are run by Sisters in Crime to recognise excellence in short crime fiction written by Australian women. Kat’s story Lady Loveday Investigates took out the Kerry Greenwood Malice Domestic Award, the Sun Bookshop Third Prize, and the Athenaeum Library Body in the Library runner-up prize. The story is available to read online.

The winners of the 2018 Goodreads Choice Awards were announced.

The winners of the 2018 Parsec Awards were also announced. Particular congratulations to Rachel of Kalanadi, who won Best Speculative Fiction Fan or News Podcast. Unfortunately, the awards came with a cloud of controversy. When it became known one of the awards was being given to a notorious alleged harrasser, several winners declined their wins.

The longlists for the British Science Fiction Association Awards have been released. Particular congratulations to Sam Hawke, Claudie Arseneault and Likhain for their nominations. BSFA members have until the end of the month to vote for the shortlists.

Nominations for the 2019 Hugo Awards are now open. Eligible voters for the nominations process must have purchased membership for Dublin 2019 — An Irish Worldcon by the end of last year or have been a member of Worldcon 76 in San Jose. This year’s Hugo Awards will have a special category for Best Art Book. The Hugo Category Study committee will be considering whether to make the inclusion permanent.

The judges for the World Fantasy Awards were announced. Congratulations to Kathleen Jennings, who has an exciting year of reading ahead!

Speaking of judging, there has been a change to the jury for the Norma K Hemming Award’s Long Work category. Lyss Wickramasinghe is stepping in for Stephanie Lai. Entries for the award close at the end of the month.

The race for the Get Up-and-Over Fan Fund is currently underway. Last year’s GUFF delegate Marcin Klak has interviewed this year’s candidates. The winner will represent Australasia at WorldCon in Dublin later this year. Voting ends on 22 April.

Speaking of Dublin, the convention administration has established a new fund to help people from diverse and marginalised communities attend this year’s WorldCon.

Meanwhile, the administrators for the Down Under Fan Fund have declared there will be no 2019 round. The fan fund was due to send a delegate from North America to Australasia. However, since WorldCon will be held in New Zealand next year, it was determined to be better in the spirit of the fan fund to defer.

Rashida J. Smith has handed over the editorial duties of GigaNotoSaurus to Elora Gatts.

Cat Rambo will be stepping down as president of the Science Fiction and Fantasy Writers of America at the end of her term in June. She shares what the job entails. Mary Robinette Kowal has announced her candidacy for the position.

The Science Fiction and Fantasy Writers of America have raised the pro rate for short fiction to 8 (US) cents per word.

They’ve also delisted Writers of the Future as a qualifying market.

Charlie Jane Anders advises writers to play to their weaknesses.

In a guest post at Bad Redhead Media, Belinda Griffin dispels some myths that may have writers resisting marketing.

John Scalzi looks at author incomes, both generally and in relation to his own.

Ambelin and Ezekiel Kwaymullina have sold a new book, set for release later this year. The Things She’s Seen is being billed as a cross-over thriller with a supernatural twist.

Bren MacDibble shows off the cover of her next book, The Dog Runner.

Juliet Marillier has announced the first book in a new series. Harp of Kings has links to two of her previous series, Sevenwaters and Blackthorn and Grim. It will be published by Pan Macmillan in Australia in October.

The Book Smugglers have released an anthology of their first four years of short fiction. The Anthology is available in limited edition paperback only.

Jenny at Reading the End reminds us that it is okay not to read racist books, even if they have beautiful writing or are considered classics.

Over at Tor.com, James Davis Nicoll has a list of 100 SFF books you should consider reading in the new year. The list contains a gratifying number of works by women and covers a range of publishing decades.