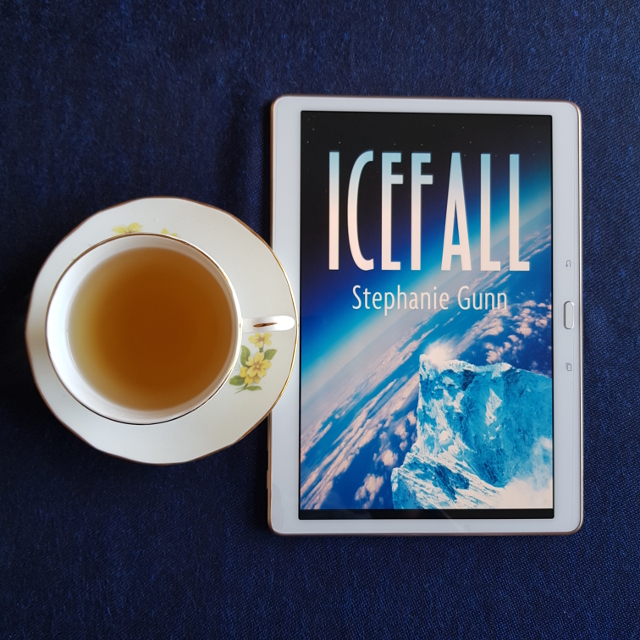 The Mountain on the planet of Icefall holds the mystery to a lost colony and an irresistible, fatal allure to the climbers of the universe. Maggie is determined to be the first to make the summit. Aisha, injured in a climbing incident herself, has always supported her wife, trusting Maggie would always return from her adventures. But no one ever returns from the Mountain.

I’ve read some fantastic books this year. Icefall is up there with the best of them. It blends hard science fiction with spirituality, then packs the cast full of diverse women and puts some compelling relationships at the heart of it all.

The story is told in first person from Aisha’s point of view. She is the descendent of Tibetan Sherpas and a former priestess of the Order of New Earth, trained to revere the mountains of the galaxy. When the story starts, she’s not in a good way. Having lost her hand in a climbing accident means not only can she never climb solo again, but she was cast out of the order for no longer being able-bodied. She suffers from cerebral storms due to a failed operation and she’s unable to connect to the virtual world that has now become commonplace for society. She’s shut out from so much, left with her wife Maggie as her sole lifeline.

Maggie claims to be descended from George Mallory, the first person to ever climb Mount Everest. She’s one of the universe’s most respected climbers, having conquered mountains which have killed many other climbers. Now, she’s driven to be the first person to reach the summit of The Mountain. Maggie felt like a bit of an enigma to me for much of the story, remaining as inscrutable as the mountain she seeks to climb. Communication isn’t her strong suit, and she makes changes to the spaceship she shares with Aisha without consultation–even going so far as to tinker with Aisha’s own bot. While this had me feeling some outrage on Aisha’s part, Aisha herself doesn’t seem to feel much resentment. Instead, she sees Maggie more like a force of nature, knowing that to try and change or tame her would be to destroy an essential part of who she is. Aisha might be the priestess and the descendent of Sherpas, but the story inverts the trope of the mystical Native guide, with Maggie as the one who is always leading the way, knowing what to do and keeping the faith.

This could leave Aisha feeling like a very passive character. And indeed, she spends a lot of time watching Maggie prepare and make her climb. However, I was never left with the sense of passivity. Aisha has her own battle to fight, albeit a much more internal battle. She must come to terms with her losses and forge her own way forward.

Respect for nature is a primary theme of the novella and The Mountain has a strong presence throughout, functioning as its own character. It moves in its own mysterious ways, claiming lives under strange circumstances. There are some hints towards scientific explanations–indeed, I’d consider the novella as tending towards hard science fiction–but there’s a sense these are as much the will of The Mountain as rational, impersonal physics. It blends the scientific and the spiritual in a way that I adored.

I also very much appreciated the feminist underpinnings of the book. It not only gives a lot of information about the process of mountain climbing, but also delves into key historical figures. The ship’s AI is programmed to look like George Mallory and is thus the only major male-presenting character in the book. The ship itself is named after Wanda Rutkiewicz, the first woman ever to summit K2. There’s also a significant mountain named after Alison Hargreaves, and the story touches on her climb of the Eiger while heavily pregnant.

Icefall was one of the most compelling stories I’ve read this year, hooking me in and not letting me go. Already, it’s calling me to return and reread.