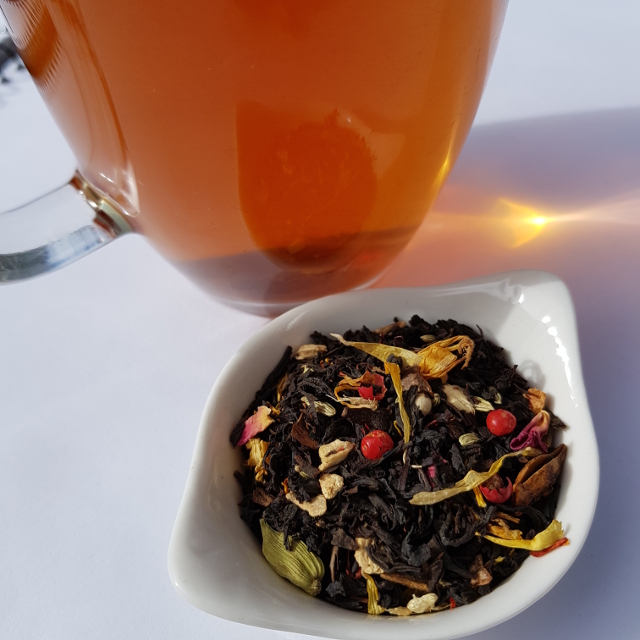 Loose-leaf Links is a feature where I gather together the interesting bits and pieces on sci-fi, fantasy and romance I’ve come across and share them with you over tea. Today’s tea is Royal Chai from Adore Tea. This is a sweeter chai that tastes faintly of coconut to me, despite having none present.

A couple of months ago, I reviewed Sam Hawke’s City of Lies. I really enjoyed the book, so I was delighted to be able to attend its Australian launch. I tweeted a little about the event while I was there.

A heap of award have been announced over the last few weeks. The Hugo Awards were announced yesterday (with bonus stats for those interested). Also recently announced were the winners of the 2018 Arthur C. Clarke Award and the 2018 Mythopoeic Awards (where particular congratulations go to Garth Nix, who won the Mythopoeic Fantasy Award for Children’s Literature with Frogkisser!).

Additionally, the Romance Writers of America announced the 2018 RITA and Golden Heart Awards. Sarah Nicolas has a good round-up of the night on Book Riot, including some reactions to Suzanne Brockmann’s controversial acceptance speech on being given the Nora Roberts Lifetime Achievement Award.

There was some additional controversy with several accusations of biased judging towards interracial romances.The RWA responded with policy changes.

And the finalists for the 2018 World Fantasy Awards have been released.

WorldCon 76 has been plagued with difficulties over the last few weeks. Complaints were raised about the institution of a dress code for the Hugo Awards, the misgendering of panel members and a general discrimination against including diverse panel members and Hugo nominees in particular. Foz Meadows has a very thoughtful and comprehensive round-up. The WorldCon committee issued several apologies and accepted an offer from Mary Robinette Kowal to assist with reworking the program.

The convention also had to contend with rival protests outside the convention centre. File 770 gives an overview of the situation in the lead up, but ultimately it didn’t seem to amount to much. Relatedly, Jon del Arroz attempted to attend the convention, despite being previously banned by the committee.

Alex Acks has a series of blog posts reporting on the World Science Fiction Society’s business meetings, which took place at WorldCon.

Wellington has officially been confirmed as the host for WorldCon in 2020. New Zealand, here I come!

Trisha Brown takes a look at romance conventions in America.

Jason Sizemore, owner and manager of Apex Magazine, has written a book about his experiences as a small publisher.

Uncanny Magazine are crowdfunding their fifth year of publication, with the Kickstarter closing soon.

Along similar lines, a UK report found the percentage of young adult books written by black and minority ethnic authors is declining. Found via Lady Business, where Jodi had some interesting reflections on the article.

Over on Book Riot, Feliza Casano has a list of 20 books that put the f/f back in SFF.

The Mary Sue have an article on women who stream Dungeons and Dragons online.

The Science Fiction and Fantasy Writers of America have released their market report for August.

Joanne Harris issues a warning about Woman’s Weekly and their new contract policy.

Over at Tor.com, Fran Wilde hosts a roundtable on world-building for SFF.

Peter M. Ball takes aim at the myth that we all have the same 24 hours in which to write.

Local readers may be interested in a few events from Felicity Banks this weekend. First off, she’s having an art exhibition and book launch for her epistolary serial Murder by Mail on Saturday 25. The following day is the launch of Iron Lights, the final book in her Australian steampunk series Antipodean Queen.

Tor have announced they will be placing a four-month embargo on new ebooks for libraries, claiming an adverse impact on sales. The American Library Association quickly condemned the move.

Twelfth Planet Press have announced the first book in their children’s imprint, Titania, will be released in May 2019. Winter’s Tale is written by Nike Sulway and will be illustrated by Shauna O’Meara.

TPP have also released the cover for Icefall, a forthcoming novella by Stephanie Gunn. It will feature space, women in sport and a portrayal of chronic illness.

Back at Book Riot, Laura Sackton shares this interesting approach to managing the size of her Goodreads To Read pile. I believe Alis Franklin has a similar approach, but it’s not one I could bear to bring myself to try.

Lastly, Green Ronin Publishing have teamed up with the duo behind James S.A. Corey to bring forth a roleplaying game based on the popular series The Expanse. The Kickstarter is in its last stages, so get in quick!