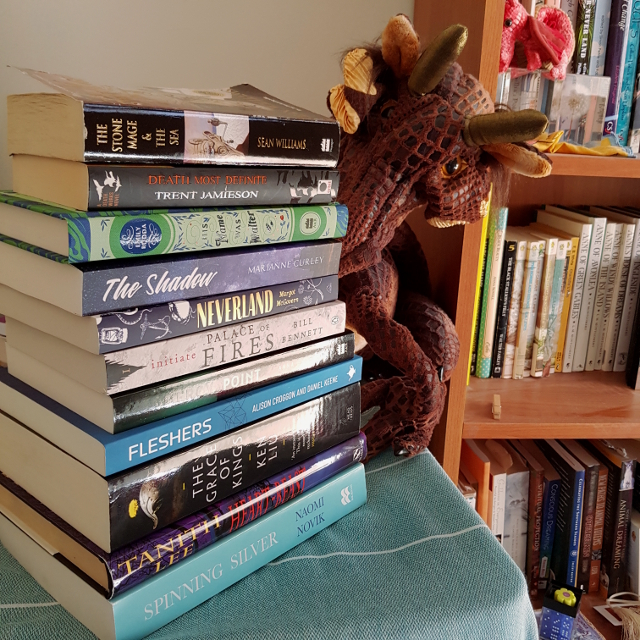 Any good progress I made on shrinking Mt TBR last month has been undone and then some. Books for Aurealis judging started arriving in earnest and I discovered a few more Hugo nominees I hadn’t properly added to my list. Then my sweetheart took me on a date to a second-hand bookstore. How’s a girl meant to resist?

To compound matters, I had a mini reading slump brought about by a touch of Hugo burnout and exhaustion from working to meet editing deadlines.

80. Extracurricular Activities by Yoon Ha Lee. Shortlisted for the Hugo Awards. A sci-fi novelette set in the past of Ninefox Gambit‘s General Jedao. He must cross into enemy territory to discover the fate of an old classmate and his crew. The spy shenanigans are a bit of fun, but the story wasn’t anything super impressive.

81. Children of Thorns, Children of Water by Aliette de Bodard. Shortlisted for the Hugo Awards. A fantasy novelette about a pair of dragons seeking to infiltrate one of Paris’s decaying Houses. Of course, it doesn’t quite go to plan. Some fascinating worldbuilding that makes me think I need to finally get around to reading de Bodard’s Dominion of the Fallen series.

82. The Secret Life of Bots by Suzanne Palmer. Shortlisted for the Hugo Awards. A sci-fi novelette about an outdated bot who is called on to rid the ship it serves of a pest. However, the bot soon gets caught up in bigger issues. A wonderful story about not giving up in the face of overwhelming odds and resisting others’ views of one’s obsolescence.

83. Saga, Volume 7 by Brian K. Vaughan and Fiona Staples. Shortlisted for the Hugo Awards. Hazel and her family land on a comet to refuel and end up staying for longer than anticipated. This issue simply confirmed for me that Saga is not my jam.

84. Wind Will Rove by Sarah Pinsker. Shortlisted for the Hugo Awards. A sci-fi novelette in which a generation ship loses access to its databases on art and culture. This leads to a schism between the generations over the need to preserve their art forms as they existed when they left Earth verses the need to create new art. It particularly focuses on folk music. I found it a compelling and engaging story, one that reflects current dynamics in SFF fandom.

85. Monstress, Volume 2 by Marjorie Liu and Sana Takeda. Shortlisted for the Hugo Awards. Still on the run, Maika teams up with a pirate from her past to take a trip out to the mysterious Isle of Bones. An interesting story, but I’m not convinced the complexity of the plot makes it a good candidate for serialisation. Admittedly, it has been about a year since I read the first one, so it was hard to remember who everyone was and what their motivations were. However, it is absolutely worth it for the spectacular artwork.

87. Moon-Bright Tides by RoAnna Sylver. A reluctant sea witch with a fear of drowning meets an exiled mermaid. This is a very sweet short story but I found it a touch clumsy in places.

88. Mira’s Last Dance by Lois McMaster Bujold. Another fantasy novella in the Penric and Desdemona series, this one follows directly on from Penric’s Mission. Still on the run from enemies, Penric disguises himself as a courtesan, helped by Mira, former courtesan and one of the aspects of the demon Desdemona. I felt this one didn’t quite live up to some of the previous novellas. I found it a bit predictable in places and the conclusion of the romance arc wasn’t quite as strong as I felt it needed to be. However, it remained a delight to read and the Shakespeare references made me smile.

89. Three-Man Advantage by Ariel Bishop. Second in the Tripping series. A sports m/m/m romance. When the stress of the ice hockey season starts to get to captain of the team David, his two vice captains and best friends step in to help. It’s refreshing to see a healthy polyamorous relationship. Although David is joining an established relationship, there’s no jealousy and a delightful lack of toxic masculinity. My one quibble is that it was edging into a few too many sex scenes for my taste.

90. The Soldier’s Scoundrel by Cat Sebastian. First in the Turner series, historical m/m romance. Jack Turner has no time for nobility and uses his criminal talents to fix problems the law simply compounds. So, he resists when he finds himself drawn to a law-abiding gentleman Oliver Rivington, as the pair investigate a packet of stolen letters. A lovely and well-written read, but not particularly memorable.

91. Summer in Orcus by T. Kingfisher. Shortlisted for the Hugo Awards. Her mother’s depression and anxiety has meant a sheltered life for Summer. Then, one day Baba Yaga moves into the neighbourhood. This YA portal fantasy was such a delight; gentle and poignant.

92. Uncanny Magazine, Volume 16 edited by Lynne and Michael Thomas. A good mix of stories, but their non-fiction was disappointingly US-centric.

DNF A Skinful of Shadows by Frances Hardinge. Shortlisted for the Hugo Awards. A young girl with the ability to host ghosts goes to live with some estranged but wealthy relatives after her mother dies. Beautifully written historical fantasy with a bent towards the Gothic. It wasn’t for me, but I suspect it was a question of timing; I’ll probably come back to it.

Luminescent Threads edited by Alexandra Pierce and Mimi Mondel
No Time to Spare: Thinking About What Matters by Ursula K. Le Guin

Rocket Fuel edited by Bridget McGovern and Chris Lough
Death Most Definite by Trent Jamieson
The Stone Mage and the Sea by Sean Williams
Heart-Beast by Tanith Lee
The Grace of Kings by Ken Liu
Fleshers by Alison Croggan and Daniel Keene
Mercy Point by Anna Snoekstra
His Name Was Walter by Emily Rodda
The Art of Starving by Sam J. Miller
The Bear and the Nightingale by Katherine Arden
An Unkindness of Ghosts by Rivers Solomon
The Fray by Emily Dale
Emergence by Marita Smith
Stratification by Isla Evans
The Cycle of Harm by M.H. Snowy
One Hell of A Ride by Seanan McGuire
No Place Like Home by Seanan McGuire
Married in Green by Seanan McGuire
Sweet Poison Wine by Seanan McGuire