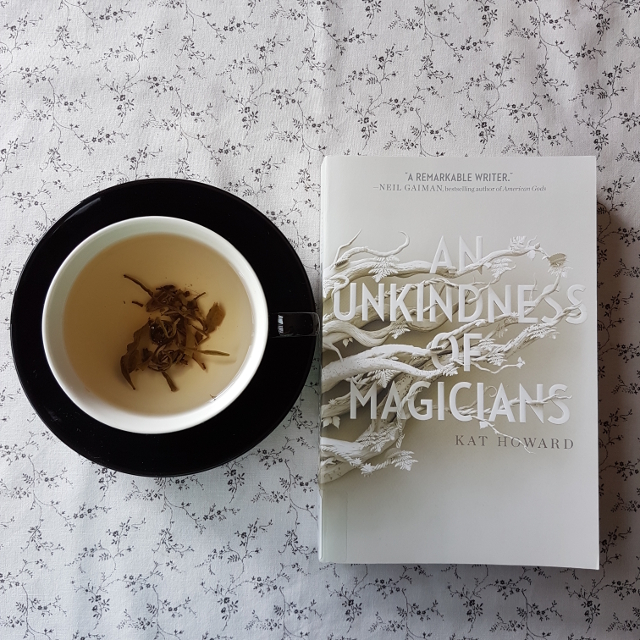 The Unseen World of wealthy and literally powerful magicians in New York City prides itself on remaining invisible.

Ever twenty years, vying for power and standing during the Turning, the heads of magical houses elect a champion–a family member or magician-for-hire–and begin a series of duels.

But the Turning has come early, after only thirteen years, and Ian Merlin, the heir to the most powerful house in the Unseen World, has been elected to become the champion of his father’s chief rival, House Prospero.

Enter Sydney: an unknown magician from a candidate house, an outsider easily dismissed among the established wealth and power of the Unseen World.

What the Unseen World will soon learn is that Sydney is a formidable duelist with power that hasn’t been seen in decades, and she has a score to settle.

I am a sucker for secret magic societies and fantasy worlds that exist just under the surface of our own. So An Unkindness of Magicians feels like it was tailor-made for me. It is a dark and atmospheric contemporary fantasy that incorporates thriller elements and had me glued to the page.

This is a novel about power struggles. The Turning has arrived and the magical elite Houses of New York City vie for control of the Unseen World, while new candidates compete for a chance to establish their own House. The story is told from the viewpoint of a number of different characters, with the focus being on the ruling House Merlin, their closest rival House Prospero, the dark and mysterious House of Shadows and the candidate House Beauchamp. It’s a large cast, particularly for a standalone novel, but I had no trouble following along. The rivalry between the houses is an obvious place for power struggles, but the way magic is set up in this world opens up narratives about oppression in a way I found satisfying. Magic requires physical sacrifice. It is also starting to fail–sometimes simply not working, at other times twisting to harm the caster. The privileged elite of the Unseen World will do whatever they can to increase their store of power and to avoid paying the physical price for it.

The world-building was one of the things I loved most about the book. The magic system is well thought out and important to the plot. I also enjoyed the way the Houses are named after famous magicians of history and pop culture but no direct references are ever made to these figures. Another element I loved was the way the physical Houses are also entities in their own right. Seeing House Prospero interact with different characters was a delight and I was a little bit disappointed there wasn’t more.

Particularly because there is a strong focus on relationships–family, friends, lovers. A couple of threads in this book involve violence against women. However, this is counterbalanced by some strong female friendships. Sydney is largely an outsider to the Unseen World, but she is not alone. Her friendship with Madison Prospero (a minor cousin in the House) is wholly supportive and a wonderful antidote to some of the darkness of the story.

The women were generally a strong point because their numbers allowed variety and contrast. Sydney might be a powerful magician, but Madison is not. And there’s also a lovely contrast between Sydney and the head of House Prospero, Miranda. Both are powerful women. However, Miranda is a privileged beneficiary of a corrupt system, whereas Sydney has been the oppressed and is keen to burn down the system that supports Miranda.

Speaking of the characters, the story is always clear about who it wants you to like. While the good characters have their flaws, the bad characters don’t tend to have equivalent redeeming features. In another book, this may have bothered me, but here it works. We know from the beginning that one of them is a serial killer, and all of them are involved in violence against women in some way or another. The tension lies more in what happens when the characters finally confront each other.

So, it was disappointing to have the end resolve so quickly.

However, that’s a small quibble. Overall, I adored An Unkindness of Magicians and will be keeping my eye out for more of Kat Howard’s work.