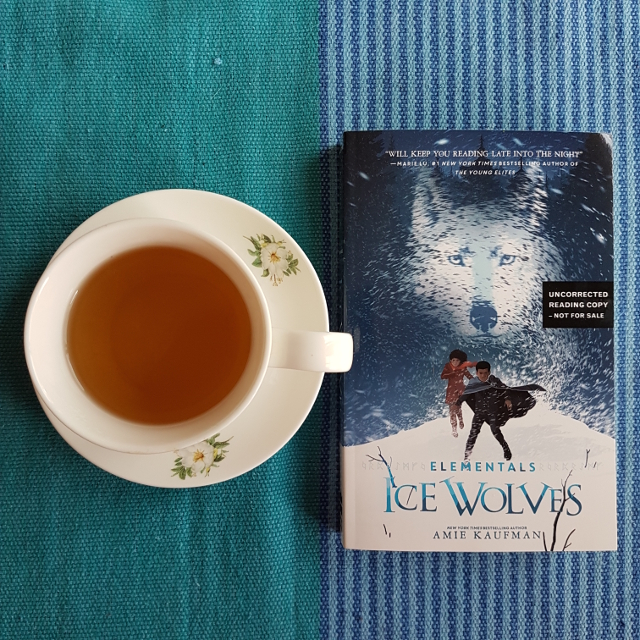 Everyone in Vallen knows that ice wolves and scorch dragons are sworn enemies who live deeply separate lives.

So when twelve-year-old orphan Anders takes one elemental form and his twin sister, Rayna, takes another, he wonders whether they are even related. Still, whether or not they’re family, Rayna is Anders’s only true friend. She’s nothing like the brutal, cruel dragons who claimed her as one of their own and stole her away.

In order to rescue her, Anders must enlist at the foreboding Ulfar Academy, a school for young wolves that values loyalty to the pack above all else. But for Anders, loyalty is more complicated than obedience, and friendship is the most powerful shapeshifting force of all.

Amie Kaufman is well known for co-authoring some of the most highly regarded series in YA, notably The Illuminae Files with Jay Kristoff and Starbound with Meagan Spooner.Ice Wolves marks her first solo novel and she shakes things up further by aiming it at a middle grade audience.

The story is told in close third person, focusing on Anders. He lives on the street with his sister Rayna and they steal in an effort to keep themselves alive and fed. Anders is a sweet boy whose conscience leaves him uneasy about the way in which he and Rayna make ends meet. He’s also not very good at it, relying on his more headstrong and capable twin to do much of the heavy lifting. So, when she accidentally transforms into a scorch dragon and is abducted by other dragons, he feels lost.

However, he quickly finds himself swept up by other companions. Having himself turned into an ice wolf–the shapeshifters that enforce law and order in Holbard and defend it from the dragons–he is taken into Ulfar Academy to be trained. I feel that any post-Hogwarts magical academy has to work hard to get away from those associations and, for the most part, I feel like Ulfar Academy accomplishes that. However, it is made more difficult by Lisbet, the Hermione Granger of Ulfar Academy. She is one of the first ice wolves Anders meets and forms part of the small pack he joins. Throughout the story, she shows herself to be a loyal friend. Being an intelligent girl, she’s quick to figure out the adults aren’t telling them everything and, as a consequence, spends a lot of time in the library and snooping around.

The representation throughout the book is reasonably well handled. Despite the medieval-ish, slightly Norse feeling of the setting, the cast is reasonably diverse. Anders and Rayna are both people of colour and there are a variety of skin tones among the rest of the cast. Same-sex relationships are casually mentioned among the adults. And the gender balance remains relatively even, with women included in positions of power. There’s also some discussion of class issues. It takes Anders some time to get used to having all his basic needs met by the academy and I enjoyed seeing him adjust. Life at the academy has also required some adjustment for his pack member Viktoria, who came from a wealthy family and now has to learn to do things for herself.

Although it was a competent story, it was also fairly predictable. There’s nothing ground-breaking or surprising here. However, this is perhaps a forgivable flaw given the target audience.