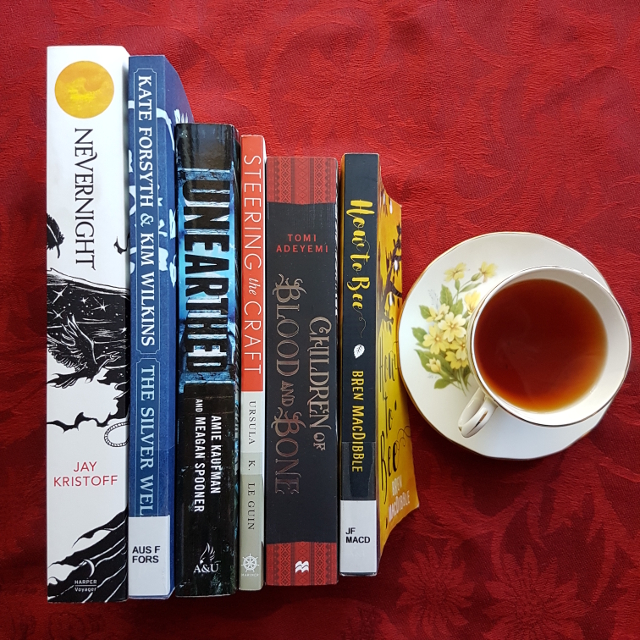 February was predominantly a month of romance and YA for me. My reading habits have grown in those directions, anyway, but I was also a bit burnt out and I find those genres comforting. Fortunately for me, I was able to take a short holiday and spent a fair amount of it reading.

So, it comes as a bit of a surprise that I missed out on breaking even with my acquisitions this month. At least it was only by one book. And I’m still somehow managing to shrink Mt TBR. I very much hope I can continue this trend for the rest of the year.

12. Beneath the Sugar Sky by Seanan McGuire. Fantasy novella, third in the Wayward Children series. Cora is new to Eleanor West’s School for Wayward Children and is struggling to make friends. That changes when a mysterious girl falls from the sky into the school’s pond. Cora must team up with the other students on a quest to return Rini to her world and, while there, set things to rights. I loved that this book had a fat protagonist. Not only was this framed as a positive in the world Cora had been taken to, but it also proves important to the story. And Cora defies stereotypes by being fitter than her companions. I also enjoyed Nancy’s cameo, getting to see her in her element.

14. The Governess Affair by Courtney Milan. Historical romance. A prequel novella to The Brothers Sinister series. After being dismissed by her employer due to the actions of a disreputable duke, a former governess seeks compensation. But first, she has to get past the duke’s ruthless money man. Milan’s work is always very thoughtful and this is no exception, touching on the ways rape doesn’t have to involve physical force. The romance between the two protagonists is very sweet. I appreciated Serena’s grit and Hugo’s kindness.

15. Steering the Craft by Ursula K. Le Guin. A nonfiction book about the craft of writing. Contains practical exercises and examples. I can see I’ll be coming back to this one a lot.

16. Beyond Surrender by Kit Rocha. Sci-fi erotica. The final book in the Beyond series. The sectors finally go to war with the corrupt city of Eden… and Nessa finally gets her story. Dallas O’Kayne has built an empire on what Nessa can do with liquor. That’s a lot of pressure for one woman. She finds her match in Ryder, a rebel trained from childhood to be the leader of the revolution. She’s impulsive, he’s cautious. Somehow, they must survive a war and find a way to meet in the middle. A satisfying conclusion to the series.

17. Tess of the Road by Rachel Hartman. Review forthcoming.

18. Ashwin by Kit Rocha. Sci-fi erotica. First book in the Gideon’s Riders series, set in the same world as the Beyond series. Super soldier Ashwin is sent by his superior officers to infiltrate the brotherhood of warriors guarding the leader of Sector One. However, he didn’t anticipate the presence of the one woman he can’t forget. You probably need to have read the prior series to get the most out of this. And while I generally enjoyed it, there was some stuff around Ashwin’s perceived lack of emotion and the label of monster with which I wasn’t entirely comfortable. However, the found family elements were wonderful.

20. The Disastrous Debute of Agatha Tremain by Stephanie Burgis. Historical YA fantasy. A super short novelette about a young woman who lives for the unladylike study of magic. One day, Agatha’s overbearing aunt arrives and whisks her away, determined to see Agatha debut and marry well. This was such a charming story. I don’t want to say too much for fear of spoiling it, but I highly recommend it.

DNF Nevernight by Jay Kristoff. Despite its popular reception, this just wasn’t a book for me. Grimdark is not a genre that appeals to me and this one tried too hard to be edgy. I felt the gender dynamics were a bit icky.

The Sisters Mederos by Patrice Sarath
The Silver Well by Kate Forsyth and Kim Wilkins
How to Bee by Bren MacDibble
Murder on the Titania by Alex Acks
Children of Blood and Bone by Tomi Adeyemi
Echoes of Understory by Thoraiya Dyer
Uncanny Magazine, Issue 21