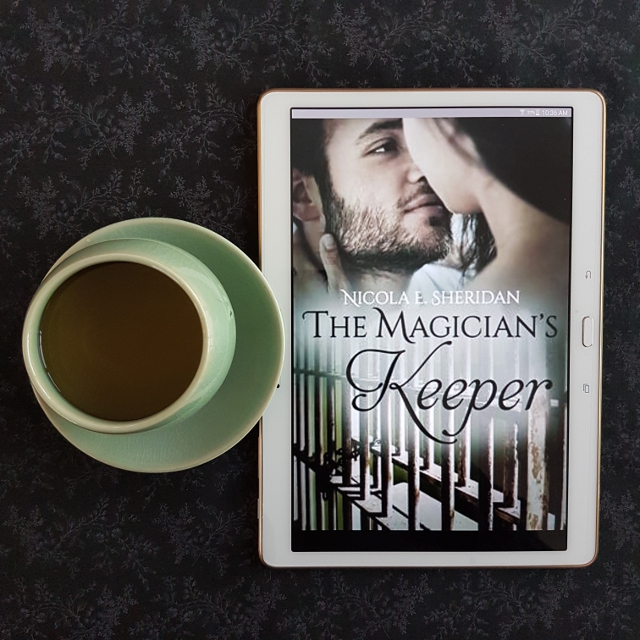 In a world where people judge one another by exacting standards of size and style, being a big girl like Eudora Splat was never going to be easy.

Though trouble is brewing between magic folk and human purists who would see them all destroyed, Dora, a half-giant, tries to eke out a quiet, unnoticed life for herself, but its hard to be subtle when you’re over seven feet tall.

Losing her job as a gardener due to human complaints, Dora is recruited as a prison guard, where she’s enlisted to protect the magician Evander Bear Gordon from human purist attack. Bear encourages her to embrace her power and celebrate her heritage, introducing her to a world where she can be extraordinary and not just weird.

But after years of hiding and shying away, can Dora find the strength to grab onto a new life and hold on to the man she’s falling in love with?

I wanted to like The Magician’s Keeper more than I did in the end.

It started out well. The beginning establishes just how lonely Dora is and gives a really clear picture of the prejudice she faces as a half-giant. She chooses to remain isolated at work, rather than face the microaggressions (and sometimes just aggressions) of her colleagues. This microcosm also shows what things are like in this alternate Australia.

I also enjoyed the setting. The action takes place in and around Perth. When we start out, Dora is working at the botanic gardens and there are some brief but evocative descriptions. It’s a setting that suits Dora’s nurturing nature, making the prejudice and heartbreak she faces on losing her job all the more poignant.

Readers who have difficulties with depictions of sexual harassment may want to steer clear. I appreciated the way things built up, beginning with small infringements of Dora’s boundaries, and the way there are times when Dora hasn’t given whole-hearted consent but is insecure enough that she doesn’t speak out, either.

Unfortunately, there were a few things that didn’t work for me. I really enjoyed Bear as a character. He was sweet and considerate. He was also the only other decent person in the story, which I felt undermined the romance somewhat. Adding to this was the fact Dora and Bear spend relatively little time together–even less as anything approaching equals. While I felt it was plausible they could make a relationship work, given time, it did have a flavour of insta-lust.

The sex scene also didn’t do much for me and I found it decidedly unsexy in places.

I also had an issue with the introduction of nano bots. There had been nothing in the worldbuilding to prepare me for this possibility and it broke my suspension of disbelief. It also served no purpose, except to render Dora temporarily “ugly”, so that Bear could show he cared about her beyond her looks.

Overall, I felt that The Magician’s Keeper had some great potential, but didn’t quite work for me.