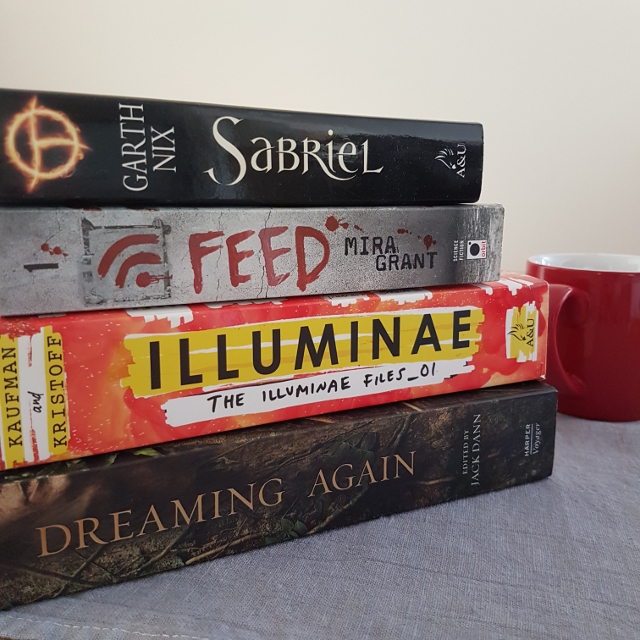 Today is Friday 13th, a time for superstition, witches and monsters. Since I’ve already covered witches, I thought this time around I’d celebrate this auspicious date (and its proximity to Halloween) with a few zombie stories.

Despite the fact I’m making this post, I’m not actually all that big on zombies. Feed by Mira Grant brought me around. Mostly because in many ways it’s really not a zombie book–it’s more a story that just happens to be set twenty years after the zombie apocalypse. Georgia and Shaun Mason are rising blog stars. With the US election campaign season underway, they’re given the opportunity to follow and report on the Republican candidate. Needless to say, things don’t exactly go to plan. The worldbuilding in this is excellent; Grant has given some careful thought to how her zombie apocalypse happened and what society might look like in the aftermath.

Australia has a strong record with zombie stories and the rest of this list is all by Australian authors. Garth Nix has fantasy zombies covered in his Old Kingdom trilogy, beginning with Sabriel. When a zombie invades Sabriel’s dorm room, she discovers he’s a messenger from her father who has passed through the Seventh Gate of Death. It is up to Sabriel to take up her father’s mantle and defeat the Free Magic necromancer who send him there. As zombie stories go, this is more my speed. The undead in Sabriel tend to be shadowy creatures of darkness (at least in the physical world), menacing, but not messy… or even really independent, since there’s usually a necromancer pulling the strings in the background. And speaking of which, I found it really refreshing to see a necromancer as the main character. Nix does a great job of showing that necromancy doesn’t have to be evil.

With fantasy covered, we now turn to zombies in space. How could I go past Illuminae by Amie Kaufman and Jay Kristoff? Kady and Ezra escape their planet after it is attacked by a corporate army. As they attempt to flee from pursuit, a mysterious virus breaks out among the refugees. The authors do such a wonderful job of blending horror and sci-fi, generating that special feeling of dread that comes with being trapped in an enclosed space with a horde of the undead. The sheer madness that ensues as order breaks down is chilling.

Since we’re in YA territory, I should mention A Town Called Dust by Justin Woolley. This is another post-apocalyptic tale, this time set in central Australia. After the zombie apocalypse struck, a wall was built to keep the undead from overrunning the north–the undead version of the Rabbit Proof Fence, if you will. When that wall is breached, teenagers Squid and Lynn are conscripted into the Diggers to help fend them off. I particularly enjoyed how the author played with the notion of the zombie craving for brains, tying it to water and the arid landscape of central Australia.

For the out-and-out horrifying, Undead Camels Ate Their Flesh by Justin Fisher remains seared into my memory. This short story appeared in Dreaming Again edited by Jack Dann. The premise is similar to A Town Called Dust, being set in central and northern Australia among walled towns and roving zombies. It tells the story of two inept criminals who get their comeuppance when they encounter a pack of zombie camels. It reads as a black comedy, but the final scene was so vivid I still remember it years later with a shudder.

I’m sure there are a ton of great zombie stories I’ve missed. What’s your favourite?