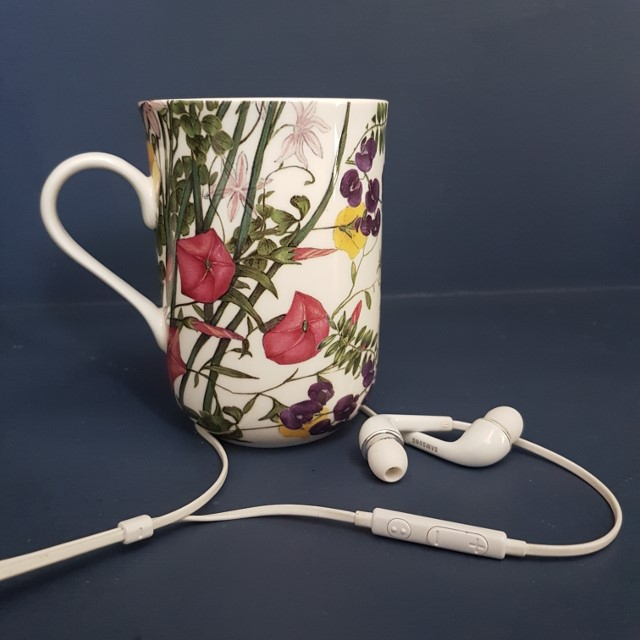 I’m a podcast fiend. I find they’re a great way to keep me entertained while I’m doing housework. Over the last few years, I’ve ended up with quite a few shows to listen to. They fall into three broad categories:

This is far and away the biggest category. It includes podcasts featuring interviews, discussions about fandom, and reviews of books, movies and TV shows.

Fangirl Happy Hour: This Hugo-nominated podcast is hosted by Renay of Lady Business and Ana of The Book Smugglers. They review books, movies and graphic novels, as well as discuss what they’ve been reading or watching more generally. They also talk about the state of SFF fandom and often segue into political commentary and discussions of mental health.

Galactic Suburbia: This Hugo-Award-winning podcast is hosted by Alisa Krasnostein, Tansy Rayner Roberts and Alexandra Pierce. Much like Fangirl Happy Hour, they discuss the state of SFF fandom, albeit from an Australian perspective. The two podcasts occasionally end up in dialogue over vital issues, such as what can be classified as cake. The ladies of GS also discuss the culture they’ve been reading, watching or otherwise consuming.

Not Now, I’m Reading: A new podcast just started by Chelsea of the Reading Outlaw and Kay Taylor Rae which focuses on reviewing genre books and media. As a keen reader of romance, I appreciate that their focus is a little wider than just SFF and the way they’re unapologetic about their passions.

Overinvested: Gavia Baker-Whitelaw and Morgan Leigh Davies review movies, TV shows and comics. Most are genre, though not all. These ladies are savvy critics who really know their stuff and are also not afraid to love material they know is rubbish.

The Skiffy and Fanty Show: This Hugo-nominated podcast is headed up by Shaun Duke and Jen Zink with a large cast of co-hosts. They do multiple segments of varying kinds, including signal boosts, interviews and Torture Cinema (wherein a panel reviews a movie deemed to be awful by pop culture).

Radio Free Fandom: Another new podcast, in which Claire Rousseau interviews guests about their fandoms. I’ve only listened to the first episode so far and am still getting a feel for it.

Reading the End: I usually prefer my podcasts to be solidly genre, but I make an exception for the Demographically-Similar Jennys. Gin Jenny and Whisky Jenny do often discuss and review genre books, but are just as likely to be reviewing contemporary literature. They also discuss their favourite instances of particular tropes and occasionally delve into research on space, the sea and Arctic explorers. At all times, they remain utterly charming.

SFF Yeah: Book Riot’s new SFF podcast. Sharifah and Jenn discuss SFF news and favourite literary tropes. I’m still deciding if this one is for me.

Sheep Might Fly: A podcast of serialised fiction by Tansy Rayner Roberts. Tansy alternates between previously published work and completely new stories. It’s a delight to hear them in Tansy’s own voice.

Tea and Jeopardy: This Hugo-nominated podcast is hosted by Emma Newman. Each of the guests she interviews has a connection to SFF and each interview takes place in a different (fictional) lair arranged by her morally-dubious butler (voiced by Peter Newman). Guests often find themselves in a bit of difficulty as they leave. The fictional framework doesn’t work for everyone, but I find it fun.

The Math of You: This is a relatively recent discovery from me. Lucas Brown interviews a range of guests about the pop culture that influenced them while growing up. Not strictly SFF; this is geekdom in many flavours. Lucas is a warm and enthusiastic interviewer.

The Writer and the Critic: Kirstyn McDermott and Ian Mond review a range of speculative fiction. I initially picked this up due to its Ditmar nomination this year and have liked it enough to keep it on. The contrasting perspectives make it engaging. However, I’m also adverse to spoilers, so haven’t yet delved into many of the episodes.

This is the newest category in my podcast list and focuses exclusively on tabletop RPGs (which, I’m sure, surprises no one).

The Gauntlet Podcast: Primarily hosted by Jason Cordova, the podcast interviews game designers and signal boosts RPGs being crowdfunded. The hosts also discuss the games they’ve been playing and what has been inspiring them.

The Gauntlet crew also run several other related podcasts. I’ve not yet listened to +1 Forward, but it has recently been nominated for an ENnie Award. However, I have listened to Pocket-Sized Play. I don’t usually go in for Actual Play podcasts, but I’ve been loving their Monsterhearts campaign, Mercy Falls.

The last category in my list is short. While I appreciate some measure of discussion about craft and industry, I find too much counterproductive for me (it’s hard enough to mute my inner editor).

Ditch Diggers: Hosted by Mur Lafferty and Matt Wallace. I picked up this one because it was nominated for a Hugo this year and I wanted to judge it fairly. Mur and Matt discuss craft, answer questions and interview other creators. It’s a solid show, though I occasionally find it abrasive in ways that weren’t intended.

Writing Excuses: These short episodes are hosted by Brandon Sanderson, Dan Wells, Mary Robinette Kowal and Howard Tayler. Each season has a distinct theme and guest co-hosts. I appreciate the diversity of voices (though it remains sadly US-centric). Each episode ends with a practical exercise.

Altogether, these make up my current playlist. Does anything catch your attention? What would you recommend I check out?

4 thoughts on “My Current Podcast Playlist”