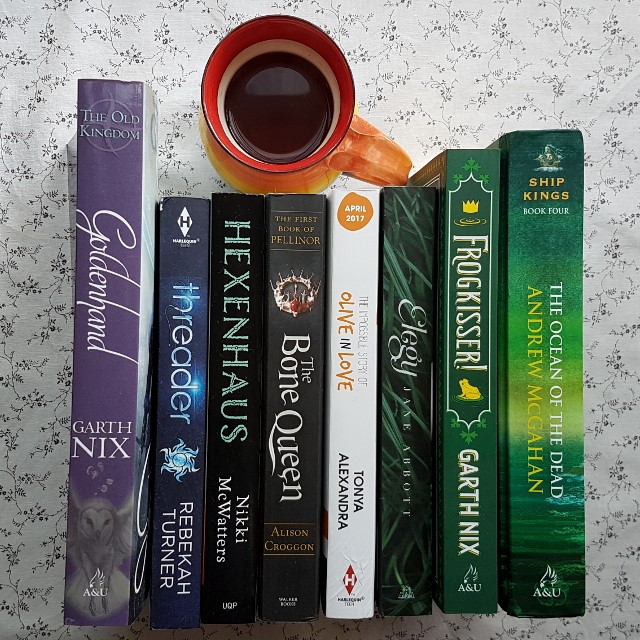 The first half of February continued January’s frantic pace as I concentrated on finishing all the remaining Aurealis nominations. The second half slowed down to a somewhat more manageable pace.

My other personal reading goals also included one trip to the library a month. February included two trips: one to pick up The Dispossessed by Ursula Le Guin and When A Scott Ties the Knot by Tessa Dare (both so I could read along with the Sisterhood of the Traveling Paperback podcast), the other to pick up Binti: Home by Nnedi Okrafor.

33. Unbidden by Shayla Morgansen. Read for Aurealis. Third book in the Elm Stone Saga. A young girl is swept up in events as a defeated council of magic users struggles to do battle with rogue elements.

34. Origin Stories by David Marshall. Read for Aurealis. A sweet, but not-too-bright, teenage girl discovers she has superpowers and is then forced to step up when her first date with the boy next door is crashed by a supervillain.

36. Elegy by Jane Abbott. Read for Aurealis. Literary fantasy. An ancient story of dark and light plays out in a small Australian town.

37. Robyn and the Hoodettes by Ebony McKenna. Read for Aurealis. A gender-swapped retelling of Robin Hood.

38. Fire Boy by Sami Shah. Read for Aurealis. Wahid just wants an ordinary life but finds himself plagued by djinn.

39. Goldenhand by Garth Nix. Read for Aurealis. When Sabriel takes a well-earned holiday, Lirael is called upon to take over as the Abhorsen. However, when her friend Nick is attacked by a Free Magic creature, she worries her training may not be enough to save him and the Old Kingdom.

40. Songlines by Carolyn Denman. Read for Aurealis. Lainie discovers she’s not an ordinary high-school girl but the guardian of a secret gate to the Garden of Eden.

41. Hexenhaus by Nikki McWatters. Read for Aurealis. Historical fantasy. The lives of three women accused of witchcraft echo through history.

42. Jumpstart by A.K. Brown. Read for Aurealis. A team of scientists come together to develop instantaneous travel through space.

43. Redemption by Lara Morgan. Read for Aurealis. The third book in the Twins of Saranthium series. High fantasy. With his twin sister banished to the void, Tallis is desperate to bring her back, whatever the cost.

44. Threader by Rebekah Turner. Read for Aurealis. Sci-fi. Josie harbours a genetic mutation that makes her telepathic and telekinetic. She does her best to stay off the government’s radar and registration lists, but after she’s caught ripping off gullible clients she’s forced to join Helios Academy for training.

45. The Price of Magic by K.J. Taylor. Read for Aurealis. Follows the adventures of Pip, a magic user in a world where magic comes at a cost to physical ability or mental health.

46. The Bone Queen by Alison Croggon. Read for Aurealis. Epic fantasy. After being exiled for his role in summoning forth the Bone Queen, a talented bard discovers he may not have been as successful in banishing her as he’d thought.

47. The Ocean of the Dead by Andrew McGahan. Read for Aurealis. A pirate captain risks everything to cross a treacherous stretch of sea around the equator to start a new life in the southern hemisphere.

49. With Roses in Their Hair by Kayla Bashe. Reviewed here.

50. The Hanging Tree by Ben Aaronovitch. Sixth in the Rivers of London/Peter Grant series. When Lady Ty’s daughter gets caught up in a high-profile murder investigation, she calls in a favour from Peter. A bit lacklustre compared to some of the others, but Aaronovitch really does well with his ending twists.

53. The Impossible Story of Olive in Love by Tonya Alexandra. Review forthcoming

54. Pocket Apocalypse by Seanan McGuire. Fourth in the InCryptid series. Urban fantasy… well, sort of. Alex Price and his girlfriend Shelby fly to Australia to help her family contain a werewolf outbreak. I was fairly impressed with the way the Australian elements were handled, but the interpersonal dynamics made this my least favourite of the series so far.

55. Beyond Pain by Kit Rocha. Post-apocalyptic erotica. Third in the Beyond series. Bren and Six have their share of scars: Bren from the former commanding officer that threw him to the wolves and Six from the vicious and now-dead leader of Sector Three. The O’Kayne gang has offered them a place to belong and between them they’ve built a fragile but trusting relationship. Bren risks throwing it all away for a chance at revenge.

Humanity for Beginners by Faith Mudge

Hands on Education by BewareTheIdes15. Yuri!!! On Ice fanfiction. Contains spoilers and explicit content. Yurio might be one of the best figure skaters in the world, but there are some areas of life where his education has been sadly lacking.

You Get a Logan, You Get a Logan, Everyone Gets a Logan! by coutlaw2523. This one is going to take a little explaining. Memory and I accidentally thought Gin Jenny was tweeting about James Logan of X-Men fame instead of Logan Huntzberger of Gilmore Girls. This led to a hilarious thread discussing possible Logan crossovers… that Chelsey of The Reading Outlaw then went and wrote. Maybe you had to be there.