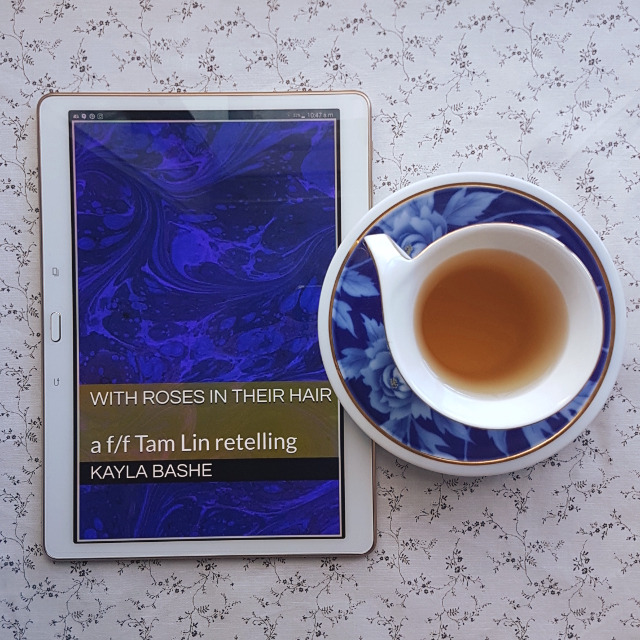 A F/F sci-fantasy retelling of the child ballad Tam Lin. Released as a tribute to the life and works of academic “tam-nonlinear” and to raise awareness of the adoptable cats they posted about having to leave behind. Content notes for parental abuse, vaguely alien body horror. A story about survival and finding beauty in love and resistance.

I’m a sucker for Tam Lin retellings and this f/f romance seemed like the perfect addition to my reviews for Read My Valentine.

This is a very short retelling, barely even making it to the category of novelette. As usual, I found it a bit too short to be truly satisfying. I felt the length did the setting a disservice because there was a lot that was intriguing. I particularly enjoyed the blending of fantasy and science-fiction. The fae of the original ballad become aliens who appear as beautiful humans, and who rule this dystopia. Of course, there are a core of humans devoted to resisting this cruel regime, but who seem almost like fae themselves with their use of implanted wings. I’d have liked to see a bit more of how the fae came to rule and how the humans came to use this technology. The story also could have used a little more set up of some elements, particularly of the sacrifice toward the end.

However, the advantage of the short length was that it kept the focus fairly tightly on the relationship between Jennet and Tambourlain. Jennet is one of the human resistance who has demonstrated herself skillful enough to earn implanted wings. But despite being a fierce fighter, she cares deeply for the people around her, even those she hardly knows. Tam, in contrast, is a formidable changeling warrior concerned only with earning her parents’ approval. Emotions are not approved of in fae culture. Yet, she can’t deny she has a strong connection with this human resistance fighter.

The writing style lacked a bit of clarity in places; in particular, it was hard to keep track of which “she” was being referred to sometimes, making things rather confusing. However, there were some nice ideas and turns of phrase. I particularly liked the sentinels made of clockwork and brought to life by the deaths of violinists.

All in all, I found With Roses in Their Hair an intriguing, but flawed story.