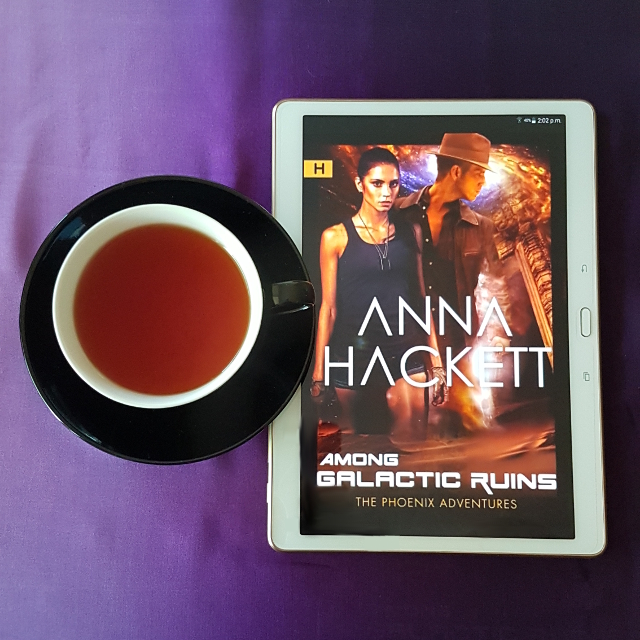 When astro-archeologist and museum curator Dr. Lexa Carter discovers a secret map to a lost old Earth treasure–a priceless Faberg egg–she’s excited at the prospect of a treasure hunt to the dangerous desert planet of Zerzura. What she’s not so happy about is being saddled with a bodyguard–the museum’s mysterious new head of security, Damon Malik.

After many dangerous years as a galactic spy, Damon Malik just wanted a quiet job where no one tried to kill him. Instead of easy work in a museum full of artifacts, he finds himself on a backwater planet babysitting the most infuriating woman he’s ever met.

She thinks he’s arrogant. He thinks she’s a trouble-magnet. But among the desert sands and ruins, adventure led by a young, brash treasure hunter named Dathan Phoenix, takes a deadly turn. As it becomes clear that someone doesn’t want them to find the treasure, Lexa and Damon will have to trust each other just to survive.

Among Galactic Ruins is a novella that blends romance, science fiction and action. Think Star Wars meets Indiana Jones: the main characters search for a lost temple on a desert planet in the hopes of finding treasure. It is fast-paced fluffy fun.

Dr. Lexa Carter defied her wealthy family to become an astro-archeologist. They conspired to keep her out of trouble by pushing her into curatorship. That suited Lexa… until she discovered a map that could lead her to lost treasure. One of the things I loved most about Lexa is even though she’s lived a sheltered life, she’s still quite capable of holding her own. She can defend herself physically, if necessary, and has a tendency to run towards trouble–particularly when that trouble is threatening Damon. Her privileged upbringing hasn’t left her without a spine.

Damon Malik is a former spy-cum-assassin who retired for the quiet life. He’s now the head of security at Lexa’s museum and drives her up the wall with his stringent precautions. He’s less than pleased about being dragged out to the middle of nowhere on a wild goose chase. However, Lexa’s passion for her field of interest captivates him to the point where he starts hoping she’ll look at him the same way she looks at those ruined temples. And no matter what’s being thrown at them–sinkholes, desert wolves–Damon never treats Lexa as if she’s incapable.

There were a few elements that didn’t work for me. The style was a little clunky in places, tending towards telling rather than showing. This was particularly the case with world-building. The dirty talk also didn’t work for me, coming across as cliched and a bit awkward.

I also found the ending a little less than satisfying, feeling that the resolution came too easily.

However, I enjoyed the fast pace and the adventure of it. There were some excellent action sequences and the sexual tension between Lexa and Damon really drew me in and had me holding my breath. And as a Jacqueline Carey fan, I got a giggle out of the Kushiel’s Dart reference.

Overall, I found Among Galactic Ruins to be a great deal of fun. It was a lovely way to ease out of Aurealis judging and interesting enough that I’ll be following up the rest of the series.