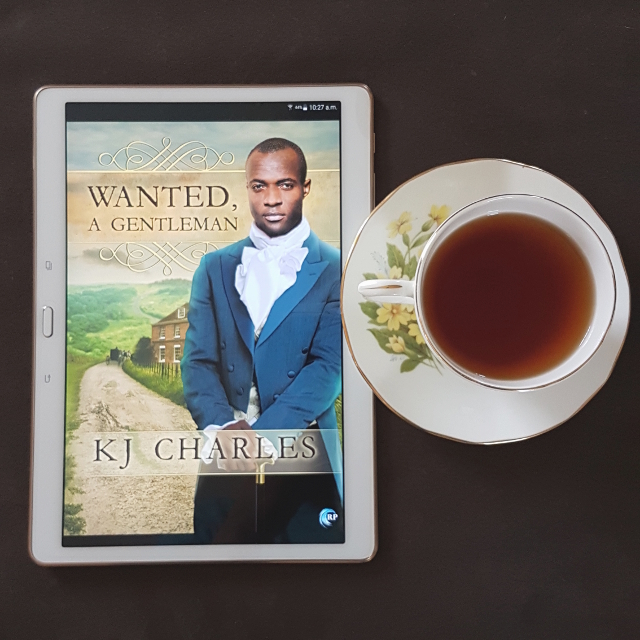 WANTED, A GENTLEMAN
Or, Virtue Over-Rated

the grand romance of

Mr. Martin St. Vincent . . . a Merchant with a Mission, also a Problem
Mr. Theodore Swann . . . a humble Scribbler and Advertiser for Love

the offices of the Matrimonial Advertiser, London
where Lonely Hearts may seek one another for the cost of a shilling

a Pursuit to Gretna Green (or thereabouts)

In the course of which are presented

the particulars of which are too numerous to impart

KJ Charles excels at gay historical romance. Wanted, A Gentleman is a standalone novella that is short and entertaining. However, as is often the case when I read novellas, I found it a little too short to be truly satisfying.

Both main characters are flawed but likeable. Theo comes across as opportunistic and disreputable, though it’s clear he has a good heart underneath. He’s also observant and intelligent, able to see the world in ways Martin can’t. These qualities are especially valuable for his trade as a writer of romance novels. This aspect of his character was something I enjoyed and never felt it crossed the line into self-indulgence.

Similarly, I appreciated Martin’s unabashed enjoyment in reading romance novels. He’s not afraid of having this hobby discovered and is happy to share his criticisms of what he’s read. It added a little extra dimension to a character who is keenly aware of honour and obligation, and generally quite straight-laced.

Historical romance is often a whitewashed genre, so it was a delight to see a PoC take centre stage. Martin was a slave who was taken from his home at a young age and given as a gift to his British masters, who eventually freed him. In the mind of the Conroy family, Martin is a close friend, yet they treat him in ways they would never treat a friend and give no thought to Martin’s experiences. It was nice to see the intersection of racism and good intentions be explored.

While I felt the attraction between Martin and Theo was well handled, the resolution of this attraction was a little sudden for me. Nevertheless, it fits in with Theo’s character (who isn’t one to beat around the bush) and ties in with the characters getting swept up in something bigger than themselves.

Likewise, there was a twist around two-thirds of the way through that came as a bit of a shock. While it was an excellent way of exploring some backstory, a little more foreshadowing would have been useful.

Wanted, A Gentleman is never going to be my favourite of KJ Charles’ work. However, it manages a lot of action and depth for such a short work and is still well worth reading.

2 thoughts on “Wanted, A Gentleman by KJ Charles”