You are here: Home > A Closed and Common Orbit by Becky Chambers

A Closed and Common Orbit by Becky Chambers

By Elizabeth on November 7, 2016 in Book Reviews 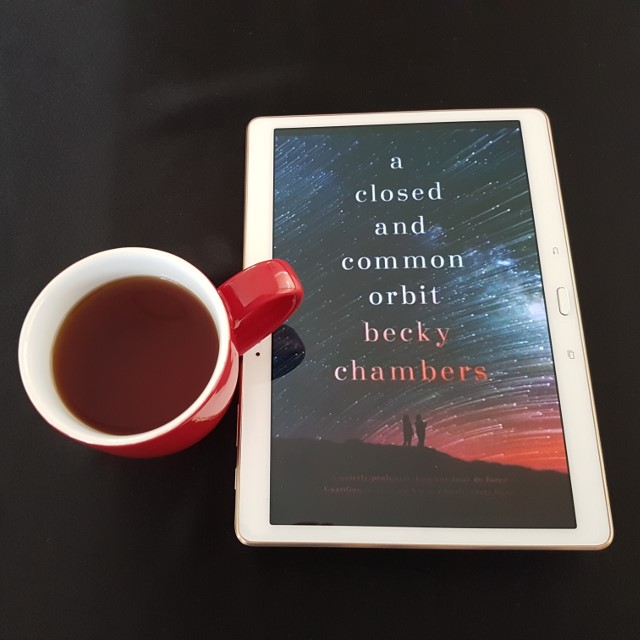 Lovelace was once merely a ship’s artificial intelligence. When she wakes up in an new body, following a total system shut-down and reboot, she has no memory of what came before. As Lovelace learns to negotiate the universe and discover who she is, she makes friends with Pepper, an excitable engineer, who’s determined to help her learn and grow.

Together, Pepper and Lovey will discover that no matter how vast space is, two people can fill it together.

It was equally as awesome but in a different way.

I will admit it does stand alone very well. It takes two minor characters from the previous book and tells their stories. The premise of A Closed and Common Orbit involves a spoiler for The Long Way to a Small, Angry Planet, so if you care about that sort of thing I’d highly recommend starting with the first book (actually, I’d recommend that anyway). I also feel the major alien species involved in this universe get a clearer and more gradual introduction in the first book. However, by and large, it works as a starting point.

Lovelace used to be The Wayfarer‘s AI. At the end of the previous book, her memory is damaged and she has to be rebooted. She wakes up with no recollection of who she once was. To mitigate the grief of the crew, a visiting mechanic, Pepper, invites Lovelace to inhabit an artificial body she has on hand. The two then return to the planet where Pepper has made a life.

A Closed and Common Orbit offers a number of contrasts to the previous book. The Long Way to a Small, Angry Planet followed an ensemble cast on their journey through space. While it dealt to some extent with identity, the focus was more on cultural differences and how they play out on both the macro and micro scales. A Closed and Common Orbit is a much more intimate book. The cast is smaller, the majority of the action takes place on the surface of two planets, and the focus is on personal identity.

AIs in humanoid bodies are banned, placing great pressure on Lovelace to pass as human or risk destruction. One of the first things she needs to do is choose a name. The significance of names to identity is reinforced by the story’s structure. Each chapter is headed up with the name of the focus character. When Lovelace decides her name is Sindra, the narrative respects this and refers to her by that name rather than continuing to call her by the old one. In this way, the story models good behaviour.

Passing as human is no easy thing for Sindra. There are similarities here to Breq from Ancillary Justice: both have difficulty getting used to being in a singular body and keep reaching for connections that are no longer there. However, Breq was somewhat used to being in a humanoid body through her ancillaries, whereas the experience is completely alien to Sindra. Her difficulties were well thought out and I felt they were portrayed in a convincing way.

While there are a number of differences between the Wayfarer books, there are also a number of similarities. The multipleclose third-person perspectives are supplemented by fictional documents, though to a lesser extent than the previous book. There are also paragraphs where characters offer philosophical views. While I found these interesting, they didn’t sit quite as comfortably with me as in the first book, perhaps because their repeated use began to give a sense of it being more of an intrusion from the author than arising naturally from the character.

The books also share a theme of found family. Indeed, the theme is stronger in A Closed and Common Orbit as we watch Pepper effectively raise Sindra while we simultaneously read Pepper’s story of being raised by AIs. And the diversity that helped make The Long Way to a Small, Angry Planet such an awesome book continues. This manifested in ways big and small. I particularly appreciated Blue’s stutter and the way an explanation was neither offered nor necessary.

Overall, A Closed and Common Orbit was just as excellent as its predecessor, albeit in a different way. I’ll certainly be buying my own copy of both books.

2 Responses to A Closed and Common Orbit by Becky Chambers