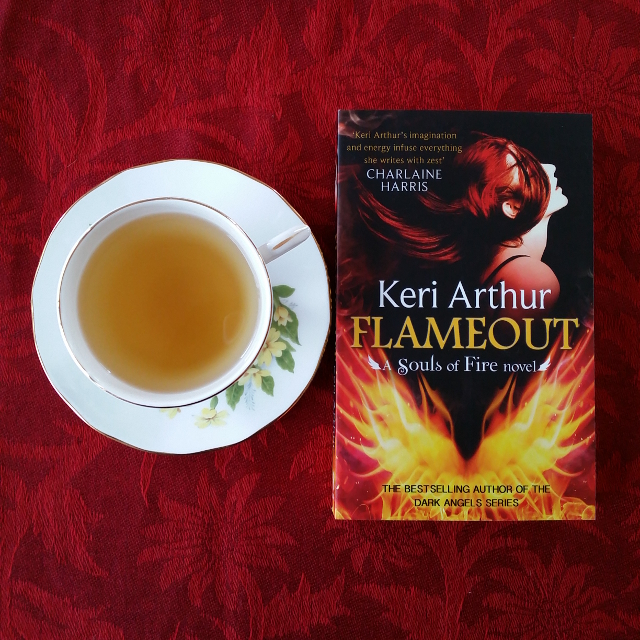 Emberly and her red hot partner, Jackson, have hit an impasse in their battle against the crazed humans infected by a plague-like virus derived from vampire blood. Their quest to unearth the leader of the group leads them into an ambush—and leaves Emberly at odds with her former lover, Sam, who’s pressuring her to join his Paranormal Investigations Team.

To make matters worse, three local witches have been kidnapped—and if their spells fall into the wrong hands, Emberly’s powers could end up smothered. With time ticking until the virus consumes the world, Emberly and Jackson must race to save the witches, find a cure, and smoke out their nemesis—or go down in a blaze of glory…

After my disappointment with the previous book, I’d hoped Flameout would live up to some of the promise of the series. Unfortunately, it proved to be an action-packed book in which almost nothing happens.

As with Wicked Embers, Flameout is very plot-driven. The vampire battle that ended the last book brought news of new factions within the vampire ranks, and most of them are unhappy with Emberly. Rogue elements of Melbourne’s resident werewolf pack also have it in for her after some altercations, and the head of the pack is unwilling to step in. And then there’s the head of the Red Cloaks who has taken a very personal interest in her. Between trying to dodge people who have it out for her, Emberly and Jackson are still in search of the missing research notes stolen from her previous employer. Their efforts have displeased the Paranormal Investigations Team, who have decided that the best thing to do about it is to force her to join them by whatever means necessary.

In case all these elements weren’t enough, Melbourne’s magic community also gets introduced when a powerful local witch contacts Emberly about seeking out some missing coven members. Once again, I found world-building to be a strength of the series and the addition of this community brings something new and interesting to the story. I was particularly interested in the way the human witch’s relationship with Mother Earth differed from Emberly’s. I also enjoyed seeing a new form of magic at work.

The story foreshadows larger plots at work. While I found this interesting, it undermined any sense of resolution. The ending was suitably flashy and cinematic, but didn’t ultimately change the status quo.

Although I was entertained by Flameout, I was ultimately disappointed and will be thinking hard about whether I wish to continue reading the series.