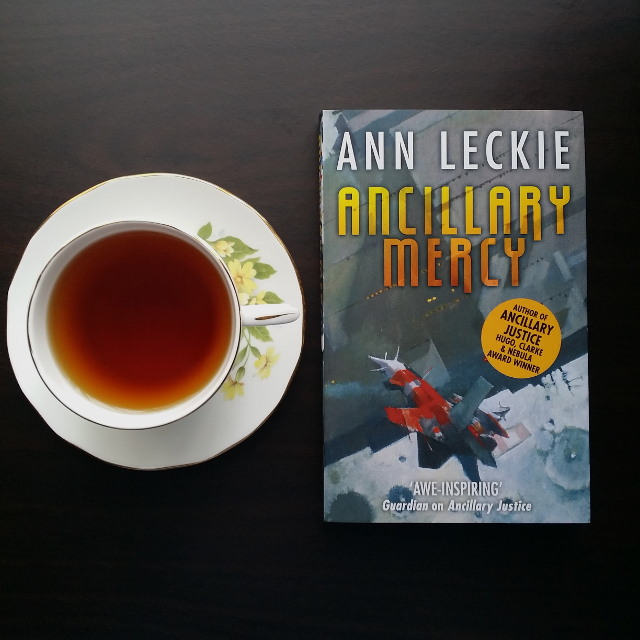 For a moment, things seem to be under control for the soldier known as Breq. Then a search of Athoek Station’s slums turns up someone who shouldn’t exist – someone who might be an ancillary from a ship that’s been hiding beyond the empire’s reach for three thousand years. Meanwhile, a messenger from the alien and mysterious Presger empire arrives, as does Breq’s enemy, the divided and quite possibly insane Anaander Mianaai – ruler of an empire at war with itself.

Anaander is heavily armed and extremely unhappy with Breq. She could take her ship and crew and flee, but that would leave everyone at Athoek in terrible danger. Breq has a desperate plan. The odds aren’t good, but that’s never stopped her before.

Ancillary Mercy is the final book in Ann Leckie’s Imperial Radch trilogy and brings the series to a satisfying conclusion.

Just as with the first two books, Ancillary Mercy has a slightly different tone to its predecessors. Each book has been about the personal to some degree–after all, Breq set out to assassinate the Emperor in revenge for the Emperor forcing her to kill one of her lieutenants. However, now Breq is firmly enmeshed in relationships with her crew and the residents of Athoek Station, leading to a more intimate atmosphere. This is particularly interesting because the book uses style to create distance. Being an AI, Breq is not always very good at identifying emotions, particularly positive ones. She often misses (or fails to interpret) clues about how the people around her feel towards her. Nor does she always recognise or acknowledge her own emotions. This forces the reader to pay attention and read between the lines.

Identity and injustice have been strong themes throughout the series so far and continue to be crucial. The intimate tone of the book gives it the scope to focus on the importance of the personal. One of the subplots focuses on privilege and microaggressions between two of the crew members, which echoes through the larger plot in relation to the AIs.

Speaking of which, I adored seeing the AIs come into their own. The animistic view of the series has been one of the things I’ve loved most and it was awesome to see that become such an important part of the plot. Each AI–be it Station or Ship–had its own distinct personality and agenda, which really brought these characters to life. There were some great parallels made between slavery and the treatment of AIs. Plus, seeing them navigate their relationship with each other was a delight–especially since they don’t always get along.

There was a reasonable amount of action in the story, particularly towards the end, which provided a nice counterbalance to the personal relationships and discussions of ethics.

I’m rather sorry the series is over. However, the depth of these books will reward rereading.