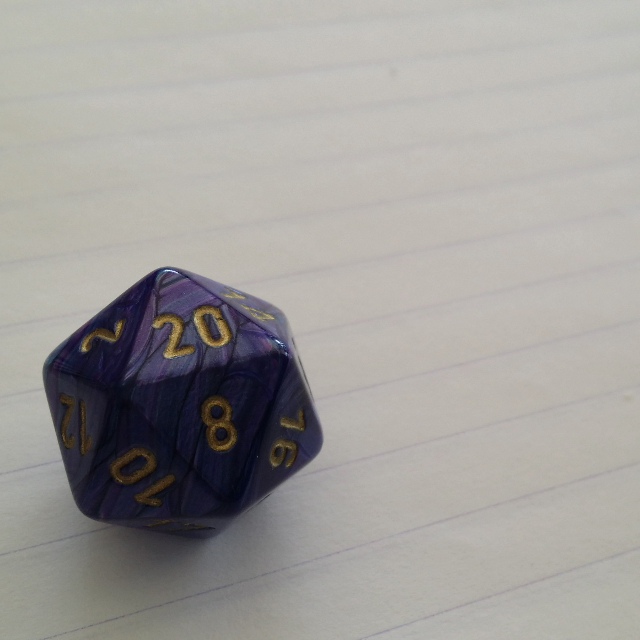 Back in April, I had the opportunity to run a meeting for the Canberra Speculative Fiction Guild on tabletop games for storytellers. Players ranged from first-timers to players who’ve had decades of experience. I had great fun introducing them to some of my favourite games, so I figured why stop there? If you are a gaming geek or a storyteller (or both), perhaps you’ll enjoy these, too.

Powered by the Apocalypse

Powered by the Apocalypse isn’t a game but a gaming system. The exact rules vary from game to game, but their core features are their use of two six-sided dice and a very simple set of stats. They’re light on rules and keep the focus on narrative, therefore making them ideal for storytellers. Exactly which Powered by the Apocalypse game you choose is largely a matter of your genre preference. Some of the ones I’ve played are:

If you are the kind of storyteller who is less focused on characters than on the big picture–such as history and world-building–Microscope may be the game for you. It’s a diceless, leaderless game where players take turns to create a wide-spanning history, beginning with the big picture then drilling down to roleplay key scenes. This history is created around a particular theme, such as humanity’s journey to the stars and forging of a galactic empire, but doesn’t necessarily occur chronologically; players are able to jump back and forward in time to play with the pieces that interest them. I found it was quite a departure from the tabletop RPGs I was used to and took a bit of practice to get the hang of.

Like Microscope, Fiasco is a leaderless game where players take turns to tell the story. However, it is more character-focused and the pace is much faster. Inspired by the Coen Brothers’ movies, participants play characters with big ambitions who just can’t pull them off. Each character has a particular relationship with at least one other character, established at the start of the game. Expect a lot of backstabbing and reeling from one disaster to the next as everyone scrabbles for what they want. If you’d like to see an example of play, check out this episode of Wil Wheaton’s Geek & Sundry.

Once Upon A Time

Once Upon A Time is a card game where players improvise a fairytale that must use the elements featured on the cards they are dealt. Play is both co-operative and competitive: everyone is telling the same tale, passing the storytelling back and forth, but each player is angling to use their elements and to tell a different ending specified by their cards. Players need to be quick on their feet and good at improvising. If you’d like to see an example of play, Geek & Sundry have also demonstrated this game.

Gloom is a card game a little like Once Upon A Time. However, instead of telling a collective story, each player tells a story about the family represented on their cards. The aim of the game is to use the cards in your hand to inflict terrible things on your family–finally killing them off–while bringing joy to the families of your rival players. The family who is killed off with the lowest sense of self-worth wins the game. Players weave each horrendous event into an overarching story of the family. If you’ve got a black sense of humour and a love of Tim Burton’s aesthetic, you’ll probably adore this game. Check out the Geek & Sundry video for a closer look at the cards: the design is awesome.

I’m sure there’s probably a ton of games I’ve missed and haven’t yet played. Do you have any recommendations?