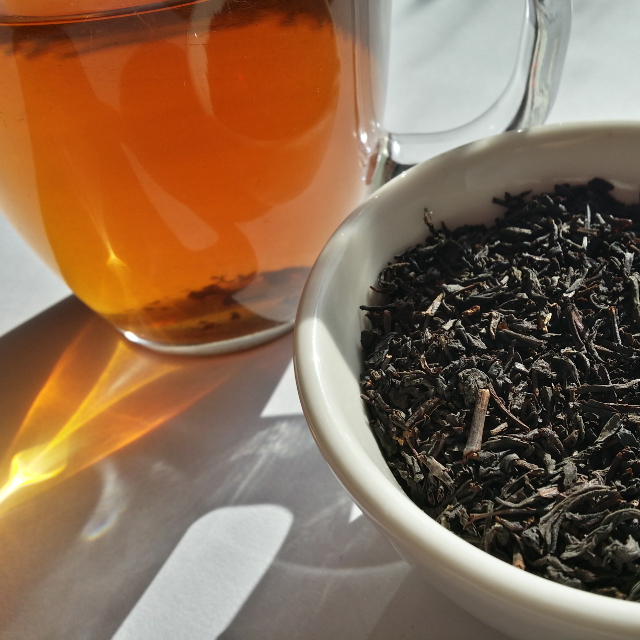 Loose-leaf Links is a feature where I gather together the interesting bits and pieces on sci-fi and fantasy I’ve come across and share them with you over tea. Today’s tea is Really Russian Caravan from T2. I’m a huge fan of smoked teas in the cooler months. This has a slightly artificial scent but remains tasty.

Feminist fans of the graphic novel series Rat Queens have been left confused and angry over a split between writer Kurtis Wiebe and artist Tess Fowler. There have been conflicting accounts of the reason behind the split. Fowler claims she was ousted to make space for the original artist, Roc Upchurch, who got booted after being arrested for domestic assault. Wiebe denies Upchurch’s return, but a few of his actions calls his words into question.

Readers who loved Letters to Tiptree may be interested to read this additional letter from Gillian Polack over at Strange Horizons.

In my recent review of Sunbolt, I mentioned the sequel would be out soon. Author Intisar Khanani shares in gifs how she is feeling now that the launch day is closing in. You can expect my review of Memories of Ash next week, along with a giveaway to celebrate.

The 2015 Nebula Award winners have been announced, with women scooping the pool.

Voting on the David Gemmell longlist is open until 24 June. I’m very pleased to see Glenda Larke included in the Legend category and hope to see her as part of the shortlist.

On the 30th anniversary of the Arthur C. Clarke Award, director Tom Hunter is doing some thinking about the future of the award.

Jim C. Hines highlights three cases where those who have spoken out against sexual harassment and abuse have gone on to excuse instances of that same abuse. This touches on the situation with Rat Queens mentioned above.

Reviewer Kay Taylor Rea notes the relative absence of women (once again) in a recent article on science fiction. She reminds male reviewers that it’s not her job to educate them.

Strange Horizons have released their annual count of representation in SF reviewing. They look at the percentage of women, non-binary people and people of colour who are reviewing and being reviewed in the major SF venues in the US and the UK.

Another way of reading more diversely might be to check out this list of 5 SFF books that treat mental illness with compassion.

But how useful are these book lists? Your Book List Will Be Graded illustrates how they fare in terms of diverse representation. A shame the site doesn’t look at nationalities.

Speaking of which, if you’re seeking work from beyond the US and the UK–or, indeed, beyond the dominance of the English language–try checking out this website devoted to SF in Translation.

Australia’s arts communities are justifiably angry after heavy funding cuts and the Australian Productivity Commission’s draconian recommendations regarding copyright. International Copyright expert Hugh Stephens provides an excellent summary of these recommendations and what they’ll mean for Australia. Australian fantasy author Glenda Larke chimes in with what it will mean for her personally.

Over at the Guardian, Eliza Sarlos discusses the funding cuts and how they’ll impact the Australian arts community. Alison Croggan does likewise at the Monthly.

And Peter Ball has some choice words to say about cultural perception of the arts (a language warning for those that need it).

If all the bad news hasn’t discouraged you, writers and poets may be interested to know that Liminal will be open for submissions from 1 June and are paying professional rates.

Over at the Australian Writers Centre, Natasha Lester suggests you don’t need a plan to write a book. As a committed planner, I’m not convinced this approach works (at least not without a lot of editing), but your mileage may vary.

Donna Maree Hanson has a round-up of writing tips.

Amanda Bridgeman pointed me towards this article on Writer Unboxed about how to write a thrilling action scene.

Likewise, this article on the delicate art of character folding came to me via Ian McHugh.

The Science Fiction Writers of America have released the results of their recent election. Congratulations to both new and returning members! I was also particularly interested by the news that SFWA intends to open membership to game writers.

In the wake of BookExpo America, the book blogging community has been having its annual discussion on etiquette, ethics and professional behaviour. This old article on the ethics of selling Advance Reading Copies became appropriate once again, though romance writer and former lawyer Courtney Milan notes it’s not illegal to sell ARCs.

PS Publishing have announced they’re starting a new imprint called PS Australia which will be headed up by Jack Dann.

Marianne Delacourt’s Tara Sharp series is being rereleased by Twelfth Planet Press and will be followed up with a new novel later this year. This is the first time this series will be available to an international audience.

While not strictly SFF related, Australian lovers of YA will be thrilled to know that Rainbow Rowell will be appearing at the Melbourne Writers Festival in August.