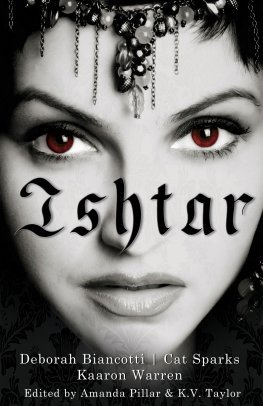 Disclaimer: A few of the contributors are acquaintances. I have done my best to give an unbiased review.

This novella collection is powerful, sexy and very, very deadly.

‘The Five Loves of Ishtar’: Kaaron Warren Follow the path that the goddess Ishtar takes through the eyes of her most devoted worshippers, her washerwomen. Sharokin, Atur, Ninlil, Shamiran, Ninevah and Ashurina share in their goddess’ loves, losses and triumphs, as kingdoms rise and fall in the Land of Rivers.

‘And the Dead Shall Outnumber the Living’: Deborah Biancotti In modern-day Sydney, male prostitutes are dying. Their bones have turned to paste and their bodies are jelly. As Detective Adrienne Garner investigates the deaths, she finds rumours of strange cults and old gods whose powers threaten her city and, ultimately, her world.

‘The Sleeping and the Dead’: Cat Sparks Dr. Anna remembers little of her life before the war, merely traces of the man she used to love. When three desperate travellers rekindle slumbering memories, she begins a search that takes her to Hell and beyond. A search for love and, ultimately, enlightenment.

Having an interest in mythology but next to no knowledge of Ishtar herself, I picked up this anthology on a whim at a speculative fiction convention in the distant past. It trends a bit more towards horror than I would usually read–unsurprising, given the authors–but it remained within my tolerance.

As the description makes clear, Ishtar is a collection of three novellas that tell the story of the goddess at different points in time. Kaaron Warren kicks off the anthology, showing Ishtar at the height of her power. Ostensibly told in first person, the point-of-view pulls towards omniscient third person. I didn’t find this a problem, but I know others may. In fact, I found the point-of-view an interesting aspect of this story. There are multiple washerwomen telling the story, but the sameness to the language encourages the reader to perceive them as the same person–much as Ishtar does. And yet, the washerwomen often have different attitudes towards the goddess they serve. I appreciated this nuance.

Being Kaaron Warren, of course there’s viscera in the seams of Ishtar’s clothing and armies of still-born babies. Despite this, I found the story a bit slow-paced and felt my attention wandering from time to time. It had a lot of work to do in laying the foundations for the other stories. Covering a lengthy period of history, it details Ishtar’s myths as well as her loves (which are usually related), bringing them to life with historical detail. I enjoyed the way it commented on the changing relationship between the genders (though I should note it was very heteronormative and subscribed to a gender binary). Likewise, it did an excellent job of showing the changes in power experienced by Ishtar.

Deborah Biancotti’s modern take was better paced and it hooked me in much more quickly. Like Cat Sparks’ story, it was told in third person, present tense. Ishtar was more of a distant character in this story, though remains at its heart. As such, her motives weren’t entirely transparent and the story lost cohesion a bit towards the end. However, I thought it connected well to the previous story and the justification for setting it in Australia was reasonable. One quibble I had was to do with the style. In places it was both show and tell, as if the author didn’t trust the reader to interpret the description correctly. However, this was a relatively minor annoyance.

Having dealt with the past and the present, Cat Sparks’ story focuses on the future. It is unclear how far in the future it is, particularly since Dr. Anna’s memory is a bit sketchy. It is also unclear where exactly it is set, other than a desert wasteland containing remnants of the present day. I liked this because it could equally have been former Mesopotamia as Australia (though I’m leaning towards the latter). I found the style a bit fussier than the previous stories, playing with language in a way that was sometimes enjoyable and sometimes tiresome. Nevertheless, I enjoyed this story most of the three. I appreciated the way certain elements of the previous stories had been reinterpreted for the future setting. As with Deborah Biancotti’s story, the ending devolved into chaos a little too much for my taste. However, it was also an appropriate finale to the anthology.

Overall, I found Ishtar a solid anthology but one not precisely to my taste.

Leave a Reply to Kailana Click here to cancel reply.