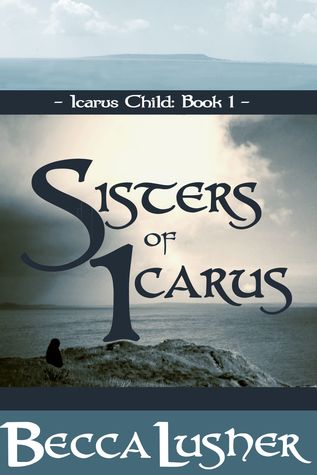 Disclaimer:The author is a friend. I have done my best to give an unbiased review.

On a small island just off the south coast, three sisters are determined to survive against nature’s unmerciful odds, but their brother is mad, everyone thinks they are strange and old voices cry on the wind.

Battling against love, grief, selkies and ghosts, middle sister Raccanta will face many tests of her strength if she intends to keep her sisters safe — and her promises intact. For on the mainland there lives a man who walks the woods and shows Raccanta a world that could tempt her far away.

Except the island keeps what it takes and it has no intentions of letting any of its sisters go.

Sisters of Icarus is a bit of an uneven book and reads almost like two separate stories. The first half concentrates on the relationship between the island and the three sisters living on it. There’s something uncanny about the island, which seems to have a personality of its own. This is especially the case after Raccanta’s brother, Icarus, is killed by his misguided attempt to fly. Voices whisper and shriek on the wind, while the sisters pretend they don’t hear.

This first half of the book is somewhat slow-paced, possibly due to the lack of a concrete antagonist. The island itself is certainly creepy and has its own personality, but its threat was nebulous and somewhat ineffective. In Unbound and Free, the island acted through Dewydd, thus allowing for the threat of physical violence. The targets were also weaker, being one lone woman and a young boy. Although Raccanta and her sisters sometimes work against each other, it is also easier for them to deflect any threat from the island; their survival isn’t threatened in the same way.

I would also like to have seen some reiteration of the island’s history. Although it is covered in Unbound and Free, I feel it would have been a useful way to ground the narrative. I wasn’t clear on where the island’s obsession with women came from and I hope this will be addressed in future volumes.

Cana’s time on the mainland makes up the second half of the book. I felt this was where the book began to hit its stride, settling into a familiar romance narrative. The island is always present between Cana and Fox, but the obstacles here are internal ones and rise from the history and emotional baggage of the characters. Fox was both charming and kind, lighting up the page wherever he was present. There were times when I didn’t know whether to shake him or give him a hug.

The two halves of the story came together at the end, giving just enough resolution to satisfy while being clear that there is still plenty for future volumes to resolve.

Although Sisters of Icarus was slow-paced at times, I found the characters were engaging. I’m looking forward to reading the rest of the series and to seeing how it fits into the wider Aekhartain world.