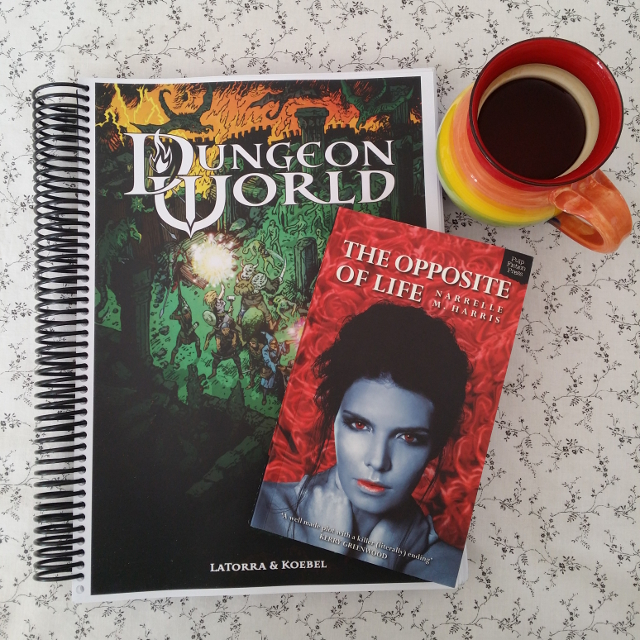 March may have been a terrible month for Mt TBR, but April made up for it. I’m very pleased that I have almost broken even for the year and I’m hoping I can keep this up for the next eight months. Hey, a girl can dream.

I’ve also done better with #ReadMyOwnDamnBooks. My goal for the challenge was to make sure 60% of the books I read this year come from Mt TBR.  It was at 40% at the end of March and I’ve managed to claw it back to 52%. I’m not confident I’ll improve much on that in May, especially because I got way too excited with some review books and will be posting two reviews a week for the next month just to keep up.

31. Marked In Flesh by Anne Bishop *. Fourth book in The Others fantasy series. As with the entire series so far, the book has some excellent ideas and intriguing worldbuilding but is let down in execution. There are a lot of characters and not enough distinguishing their voices, even in close third-person.

32. Bespelled by Dani Kristoff *. A Sydney witch finds herself in a tricky predicament when a malicious spell renders a handsome, high-powered lawyer in love with her. A fun read, though it veered briefly into some dark territory.

34. The Ruin of Gabriel Ashleigh by KJ Charles *. After Lord Gabriel Ashleigh gambles away everything he owns, he’s given one last chance to save himself. A prequel to Charles’ Society of Gentlemen historical m/m romance series. This short story absolutely sizzles.

35. A Fashionable Indulgence by KJ Charles *. The first of the Society of Gentlemen series. Harry Vane was brought up as a seditionist, but his heart was never really in it. When his wealthy grandfather plucks him from obscurity, he is delighted to have a chance at living the high life. However, first he must learn how to act as a gentleman… and his tutor has him thinking all manner of ungentlemanly thoughts. As with Rag and Bone, Charles does an excellent job of conveying the desperation of poverty. Harry’s uncomplicated pleasure in life was a delight.

37. A Confidential Problem by KJ Charles *. A short story that’s really more of a deleted scene. Silas and Cyprian discuss their emotional entanglements while conspiring to solve a sticky situation.

39. Dungeon World by Sage LaTorra and Adam Koebel *. If you’re interested in playing role-playing games but find Dungeons and Dragons too complicated, this is the perfect system. It is also one of the clearest and most succinct RPG manuals I’ve ever read.

40. The Opposite of Life by Narrelle M. Harris *.  When bodies start dropping like flies around Melissa Wilson, she decides it is up to her to investigate. She soon discovers Melbourne has an undead underground she never suspected. I felt it did a good job of subverting some typical urban fantasy tropes and I particularly enjoyed the relationship between Melissa and her awkward investigative partner, Gary.

41. Widdershins by Jordan L. Hawk *. The first book of the Whyborne & Griffin series. A private investigator and a languages scholar team up to uncover a cult while struggling with their attraction for each other. Another m/m historical romance with a big dollop of the supernatural that gives it a vibe similar to The Mummy. Which the story plays on. Griffin was charming, but it’s Whyborne’s adorable but heartbreaking awkwardness that did me in. Highly recommended.

DNF – Unwrapped Sky by Rjurik Davidson. Epic fantasy. Civil unrest stirs in the city of Caeli-Amur as the minotaurs arrive for the Festival of the Sun. I didn’t find an emotional hook to keep me interested, but I didn’t get very far into it. Perhaps it’s one I shall have to try another time.

DNF – Wolfskin by Juliet Marillier *. A sweeping Viking saga. That it is an early work of Marillier’s is evident in the writing style, though it framed scenes very cleverly. Ultimately, the subject matter just wasn’t for me.

The Year’s Best Australian Fantasy and Horror 2010 edited by Liz Grzyb and Talie Helene.
Among Galactic Ruins by Anna Hackett

Wingborn Ch 4-8 by Becca Lusher. A Regency-style fantasy with giant eagles. Seriously, what more could you want? Mhysra has been training hard as a recruit for the Rift Riders and keeping her activities secret from her parents. When she attends the Midsummer Ball, she discovers something unexpected about her training officer.

The Jewel and Her Lapidary (Excerpt) by Fran Wilde. When the Jewelled Court is betrayed, the last princess must find a way to survive. Some intriguing worldbuilding here. I’ll keeping an eye out for this novella from Tor.com.

First Kill by Jennifer Fallon. A prequel short story for Fallon’s The Lyre Thief about assassain Kiam Miar’s first kill. It’s not necessary to have read the novel first. A touch predictable, but still very enjoyable. Kiam remains one of my favourite characters in this world.