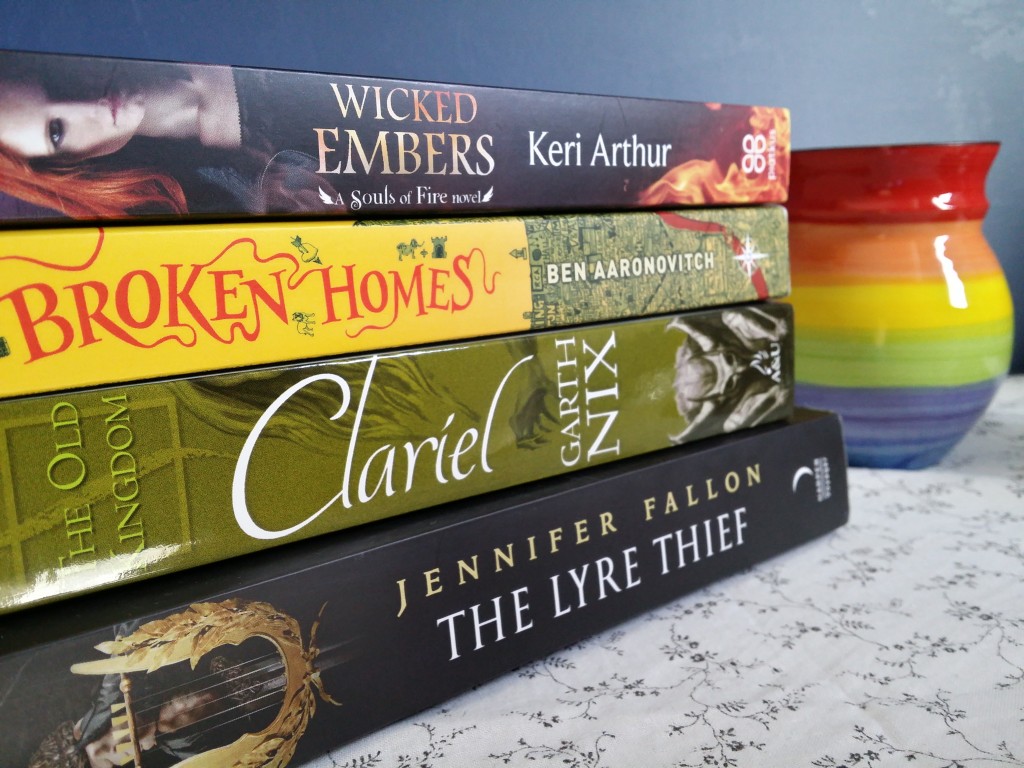 Wow. It seems the increase in my reading pace is sticking around. In fact, I’ve read so much that Mt TBR has actually shrunk a little bit. If this keeps up, I might actually break even for 2016! But let’s not get too far ahead of ourselves. Contact2016 is in March and I anticipate a trip to the dealers room may do some damage.

Despite the good news for Mt TBR, I’m not doing nearly so well with the #ReadMyOwnDamnBooks challenge. My goal for the challenge was to make sure 60% of the books I read this year come from Mt TBR. I’m currently sitting on 47%, thanks to a number of review books and Leife Shallcross’s collection of Ben Aaronovitch. The war is far from lost, though; I’m reasonably confident I can make up some ground in March, even with the convention to attend.

10. The Duchess War by Courtney Milan *. Romance as it is meant to be. This is a Regency romance about Minnie, a young lady seeking to flee the scandal of her past by being as bookish and mousey as possible. Unfortunately for her, the Duke of Clermont sees straight through her façade and has an agenda of his own that puts her at risk. I especially loved that while both characters came across as smart, there was also a significant difference in their levels of intelligence–a difference that was never used to make one character seem lesser. Highly recommended.

12. Moon Over Soho by Ben Aaronovitch. The second in the Peter Grant/Rivers of London series, which are crime novels masquerading as fantasy. I’m enjoying these a whole lot and particularly liked seeing the continuing characters develop their relationships. The book also made me laugh out loud many times.

13. Take Me As I Am by Charmaine Ross. A charming contemporary romance set in Australia. It was the characters that really sold it for me. Both are good people trying to do their best for the people they care about. This makes them likeable and provides one of the central conflicts. Kate’s workaholism was deftly done and recognisable. I also loved David’s warm, open nature and the way he manages to hold onto that, even when Kate pushes him away. My one quibble is I think having David be both a talented sculptor and musician seemed overkill to me, and perhaps trying too hard to overcome the tradie stereotype.

14. Chasing Death Metal Dreams by Kaje Harper *. Another contemporary romance, this time m/m between a Latino transgender death metal musician and a Jewish goth artist. I really wish I’d had the space to review this because it was a gorgeous story. It struck me as sensitively done, though being outside my experience I can’t make the claim with authority. I also had a few quibbles about where it verges on White Saviour territory. But overall, a fantastic story.

17. Whispers Underground by Ben Aaronovitch. The third in the Peter Grant/Rivers of London series. As with the last, I loved the character development, especially with the active return of a couple of characters. I was also pleased that it didn’t play out quite the way I expected. However, it lacked a little of the suspense of the previous two.

18. Freedom Spiced and Drunk by M.C.A. Hogarth *. A fantasy short story about a race with three genders and two puberties. An interesting premise and the yearning for freedom is captured well, but overall it didn’t do much for me.

19. Broken Homes by Ben Aaronovitch. The fourth in the  Peter Grant/Rivers of London series. OMG, that ending! Talk about epic! I am really loving this series.

20. Susanna and the Spy by Anna Elliott *. A Regency mystery novel with a romance sub-plot. An unemployed governess investigates the murder of her estranged (and rich) grandfather and uncovers more than she bargained for. I found it rather dull and didn’t really buy Susanna’s attraction to her mystery man. In fact, the emotional elements were lacking across the board.

DNF – The Lord and the Mermaid by Bernadette Rowley *. A fantasy romance whose worldbuilding needed work. I also struggled to connect with the characters.

Forest of Memory (Excerpt) by Mary Robinette Kowal. I’ve been meaning to get to her Glamourist books for ages. This is quite different from those, being more of a sci-fi. It’s an intriguing premise but I’m not yet sure it’s for me.

Wingborn Prologue by Becca Lusher. To quote the author: It’s a high fantasy world with giant, talking eagles, Regency-esque manners, a YA protagonist and lots and lots of clouds. Five hundred riders and their eagles disappear from the strongest citadel in Etheria, leaving Lieutenant Lyrai to figure out what happened. I’ve read earlier iterations of this story and Lyrai is one of my favourite of Becca’s characters (though, to be fair, I have many).