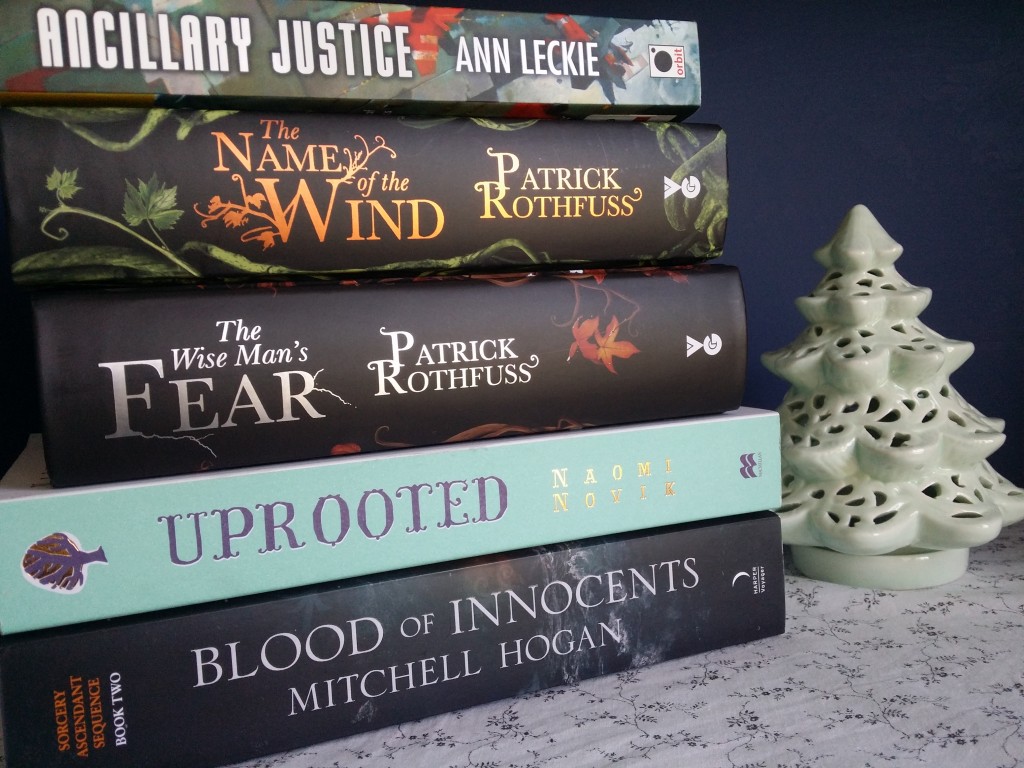 Happy New Year! I hope 2016 has been treating you well so far. I had a lovely time with family and friends. My only complaint is that I didn’t get enough reading time (but when is that ever the case?).

Before I kick off with all my book-geeky stats, I want to congratulate Liz Barr on winning the 2016 NAFF race. It was a close race and I’m very thankful to everyone who voted for me. Perhaps I will have better luck next year.

Also, Round 15 of the Bout of Books reading challenge kicks off today and will be running for a week. There’s still time to sign up if you’d like to join in.

With that out of the way and with 2015 officially over, it’s time for me to take a good look at my reading stats for the year.

2015 was a fantastic year for my reading. I managed 91 books. It’s not the most I’ve ever read in a calendar year, but it comes close and certainly beats the 56 books I managed in 2014. I should add a caveat that this included graphic novels and a few bits and pieces too short to be strictly considered novels.

The majority of what I read was fantasy and romance, as usual. The exact split is a little difficult to determine, due to my predilection for fantasy romance. I was interested to see I read much more science fiction in 2015. I attribute this partly to Amanda Bridgeman’s Aurora series and partly to my participation in The 2016 Sci-fi Experience reading challenge (which will continue until February).

64% of the books I read in 2015 were written by women, down on 69% in 2014. I read 16 books written by authors of unknown, non-binary or multiple genders, which is just one less than the total number of books I read that were authored by men.

2015 was the first year I started tracking the diversity of the authors I’ve read. I found this a difficult variable to track because it’s not always obvious from an author’s bio or even with a Google search. I may need to reconsider if this is a useful approach. Nevertheless, I am somewhat disappointed to find that only 22% of the books I read were from authors I consider diverse.

More than half of the books I read in 2015 were e-books. This is a definite change from 2014, where the proportion was closer to a third. I suspect the change is mostly likely attributable to joining NetGalley and becoming a more active reviewer.

These numbers probably don’t mean much to anyone else, but I have such fun keeping track of them throughout the year. I’m looking forward to seeing what 2016 brings.

One year I’d like to at least break even. Perhaps 2016 will be that year (I hear that laughing).

Despite the overall numbers, December was an excellent month for reading. The holidays allowed me to relax a bit and power through a few books. The flip side is that the holidays also mean an influx of books… and this doesn’t even count the books I’ll be buying with the fortune I was given in gift cards.

80. Rat Queens: The Far Reaching Tentacles of N’rygoth by Kurtis Wiebe, Roc Upchurch & Stjepan Sejic. The second volume of Rat Queens. I was a bit disappointed with the change in the art style, though I recognise the necessity. The writing remains as snappy as ever. It was nice to see more background unfold but I would have liked a bit more depth (though I realise I’m almost always going to feel this way about graphic novels).  Some full frontal (attractive) male nudity makes a nice change from the female nudity found so much in pop culture.

81. Sorcerer to the Crown by Zen Cho. Magic-infused Regency. This book does such a great job of colouring the language with the perspectives of its characters, which is important in a book that focuses on discrimination in Regency London. A touch predictable in places, but overall wonderfully thought-provoking and well worth reading.

84. A Grosvenor Square Christmas by Shana Galen, Vanessa Kelly, Anna Campbell and Katie Noble. An anthology of four linked Regency romances set around an annual Christmas ball. Some fun seasonal reading that showcases the ability of the writers. There was one story I didn’t enjoy quite as much, but all were well written.

85. The Hobbit Chronicles: The Art of War by Daniel Falconer. Reviewed here.

87. Steeped by Annelies Zijderveld. A recipe book for tea-infused cooking. A number of the recipes seem rather fiddly or beyond my (basic) skill level, but there were still a few recipes I’m keen to try out.

88. In Heaven and Earth by Amy Rae Durreson. Review forthcoming.

89. Vision in Silver by Anne Bishop. A fantasy novel set on an alternate Earth where humans live at the tolerance of the Others–shapeshifters and Elementals–who control the land. I haven’t been a huge fan of the series so far, but I find myself wondering if I’ve misjudged it. The characterisation remains fairly shallow, but it does wrestle with some pretty heavy issues around self-harm, slavery, discrimination and the environment.

90. The Smuggler and the Warlord by KJ Charles. A short prequel to the series A Charm of Magpies. In fact, it was rather shorter than I expected, being just three pages. It didn’t really add anything to the series but I’ll take whatever I can get of these characters.

91. Feast of Stephen by KJ Charles. Another short story from the series A Charm of Magpies. On the feast of St Stephen, Lord Crane attempts to put a new member of the household at ease by swapping stories. As always, a charming tale, and one that does a great job of hinting at a wealth of backstory while only providing what is necessary.


The Duchess War by Courtney Milan

No online reading for me last month. I’m going to have to do better, since I’m developing quite a backlog!