By Elizabeth on October 9, 2015 in Events & Challenges

Last weekend I attended Conflux, Canberra’s speculative fiction convention for writers and fans. The theme this year was Light, in line with the UN’s International Year of Light and Light-based Technologies. Special guests were Isobelle Carmody, author of the The Obernewtyn Chronicles, and Tehani Wessely of FableCroft Publishing. As is always the case, there was a lot of good programming to see, so I had to split my report into two parts. The second part will be posted next Wednesday. 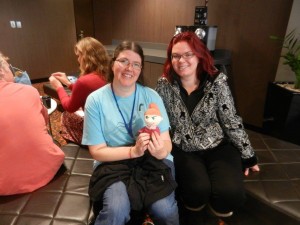 Me with Little My and Alis Franklin. Photo courtesy of Gillian Polack.

The convention began on Friday, 2 October. Not everyone was able to get away from work to attend the first day, but there were still plenty of familiar faces around when the registration desk opened. I also met a few newcomers, including the representative for the 2017 Helsinki Worldcon, Little My. She really got into the spirit of the convention and ended up with an extensive album of photos.

As has been the custom for the last few years, Friday was mostly devoted to workshops. I attended Gillian Polack‘s workshop on creating magic systems. Being a historian, Gillian approached this topic by looking at the ways in which magic in the Middle Ages was less a system than a complex, messy worldview. Writers need to express this worldview through telling detail–those small things that may not look important on the surface but actually say a lot about the character or the world. Gillian used the example of Turkish Delight in C.S. Lewis’ book The Lion, the Witch and the Wardrobe, bringing along a sample of the delicacy to help inspire us.

After lunch, I attended Tara Ott’s demonstration of special effects makeup. Tara talked a bit about her experiences with the local zombie walks and the cosplaying community. She was dressed the part, complete with eerie white contact lenses and several scars drawn on her face. The demonstration included the use of both latex and wax, with Tara outlining the advantages and weaknesses of each. She did an impressive job of making up my knuckles to look bruised and she also demonstrated how to use latex to replicate burnt skin.

The Opening Ceremony took place in the evening. The Star Wars Imperial 501st Legion were in attendance, making the audience nervous. However, it turned out they may have been there for our protection, as MC Laura Goodin received several phone calls about the outbreak of a zombie apocalypse while she ran the ceremony (with great flair). 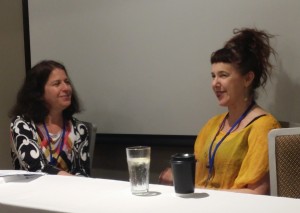 Saturday kicked off with Isobelle Carmody’s Guest of Honour interview. Interviewer Kaaron Warren made the clever move of focussing on Isobelle’s short stories rather than novels. This allowed Isobelle to talk about a broader range of topics, including time she spent in Paris while young. Isobelle said she believes that time spent a little bit hungry, tired and sad sharpens a writer. Airports are especially good for this and she expressed disappointment that modern technology doesn’t allow as much space for boredom as there used to be.

Isobelle also talked about the pressure placed on her by the big publishers to whom she has been contracted. She spoke warmly about small press, who have greater flexibility and passion for their projects. At the end of the interview, there was an impromptu launch of Evermore, a non-traditional graphic novel she collaborated on with artist Daniel Reed and published by Windy Hollow Books. 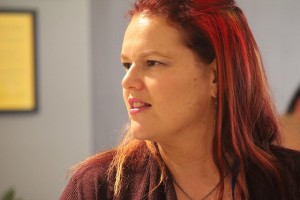 Later in the day I attended a discussion on editing between Guest of Honour Tehani Wessely and editor of Cosmos, Cat Sparks. The program item said that it was “not for the faint-hearted” and, indeed, it probably should have come with a language warning. However, it was hysterically funny and contained some good advice. Cat urged writers to really do their research and concentrate on making sure their fiction is authentic–this goes as much for eavesdropping on dialogue at the food court as making sure the physics used is plausible. Cat and Tehani also touched on the way in which rejection isn’t personal, but can simply be the wrong time and wrong book. It is important for writers to read work by the editor and publisher they’re submitting to. Cat also advocated following an editor on social media if you find one who does work you like and whose style suits your writing. It helps you to be aware of opportunities as they come up.

The pair reconvened on Sunday morning for Tehani’s Guest of Honour interview. Tehani mentioned that she used to write but gave it up, claiming she was no good at it, despite having won a Scarlet Stiletto Award for her unpublished crime novel. Her passion is for bringing books and people together. Juggling a full-time job and family, as well as running FableCroft Publishing and convening of the Aurealis Awards is no mean feat but she remains undaunted by obstacles. Tehani said that the key to her success has been having people around her that she can rely on and ask for help. That said, there are times when she has burnt out. Shortly after the launch of the Cranky Ladies of History anthology, she became discouraged and cancelled her next anthology, saying she was going to give up the business. She lasted a week before she found a new idea that was too enticing to let go. She said that Conflux had already given her a couple of exciting new ideas, so look out for those!

Tower of Thorns by Juliet Marillier
Thorn by Intisar Khanani