Leife Shallcross joins me today. I’ll let her tell you the tale of how we met. Being the community-minded person she is, Leife is currently both the president of the Canberra Speculative Fiction Guild and the co-chair of Conflux, Canberra’s speculative fiction convention. Being the Secretary of the former and a keen participant in the latter, I’ve been able to witness first-hand just how hard Leife works to support the local spec-fic community.

The Best Advice Ever

You know those articles that appear now and then with advice about writing from famous authors to, well, the rest of us? (Like this one, which is a little more fun than most.) Well, if anyone ever asked me, “find your writing community” would be the first thing I’d tell them.

Back in about 2010 I decided to “take myself seriously” as a writer. I wasn’t really sure what that meant, except that I was going to stop just writing for an audience of me, and start trying to see if what I was producing was good enough to get published.

I joined my local writers centre and did a bunch of workshops, including a Year of the Novel course. This was my first experience of something approximating a writers group. We were all working on very different stuff: I was working on two fairy-tale based novels (couldn’t decide on which), others were working on romance novels, thrillers, memoirs, children’s stories, historical non-fiction. All sorts of stuff. This group offered me my very first opportunity to share the experience of writing with other aspiring authors, and to have my work critiqued by other writers. It was immensely valuable, but it also taught me another key lesson.

It’s really important to find the right writing community for you. After the workshop, a few of us did make some initial efforts to critique each other’s work outside the workshop, and I even went to a few sessions of a much smaller writer’s circle with another colleague. But I think we were all probably heading in such different directions with our work, we weren’t able to offer each other what we really needed. What did we need? Well, critiquing and encouragement is one thing. But what I needed, and what I subsequently found, was a community.

There are two communities I want to talk about.

Somewhere in that heady first year of Taking Myself Seriously, I submitted a short story to a call out for an anthology called Winds of Change being published by the strange and arcane-sounding Canberra Speculative Fiction Guild. The editor was discerning enough to instantly spot the brilliance of my work (Hi, Elizabeth!!), and Voila! I had my first publication credit.

More importantly, though, this was my segue into my writing community.

When I joined CSFG, I discovered a group of people who got the stuff I wanted to write. They were actually interested in my stories, and I found their stories interesting. They were writing for the same audiences and the same markets, they were trying to hit the same beats. They were drawing on the same collective consciousness of the genre.

Critically, because of the size and makeup of the CSFG, I was also mixing with writers who were heaps more experienced than me. They knew about markets, and who was who, and plot arcs, and character archetypes and Mcguffins and all sorts of stuff I had no clue about. They taught me things like Finish What You Start, and Pick ONE Story To Focus On. I’m not sure if they see it this way, but I’ve got several good friends who I also regard as my writing mentors. They’ve provided invaluable guidance over the years. My writing has improved and I have a better understanding of how the industry works because of them.

I have writing buddies, too. These are the peeps I know I can rely on for an emergency critique to meet a deadline, and who I crit for on a regular basis. I trust their judgement because they’re all awesome writers in their own right. And they’re great friends. (And you know what? That’s the difference between a writers group and a community.)

CSFG is a great community that draws strength from both its diversity, and its commonalities. I’m so grateful that at some point in the dim dark past (maybe around the year 2000, I think) a bunch of people decided to put a bit of structure around their community at the time and build something that was going last. The CSFG now offers a raft of activities to support its members, including short story and novel critiquing, as well as a novel writing group, workshops and even the odd writers retreat.

I’ve been on the CSFG committee for a few years now (I’m currently the president), because it’s important to me to see something like the CSFG work. We’re all volunteers, so you can only take what people are willing and able to give. But the trick is to harness that, and draw on everyone’s strengths, and make it fun. The CSFG community has been so valuable to me, I want it to keep offering the same great support and opportunities to anyone who wants to write in the spec fic genre. Plus, I get to hang out and eat chocolate biscuits and drink wine with some of my favourite people.

One of the things I’ve learned from the more experienced, more savvy members of my writing community, is that it’s not good enough to be a good writer. It’s a good start, but if you are going to be a successful artist in any art form, you need to understand the business of the industry you’re in. That means local circles aren’t enough.

This year I’ve been involved in organising Canberra’s main spec fic writing convention, Conflux. Conflux is a bit of an unusual genre convention, as it’s aimed mainly at writers, rather than fans. For this reason it attracts a large number of spec fic writers from all over Australia. It’s been great fun so far, and I’m really pleased and proud to be helping such a fantastic thing continue.

I’ve got a youngish family, so it’s not that easy for me to travel to interstate cons at the moment. So Conflux has been my main opportunity to network with writers and others in the industry from outside Canberra. I think we’re incredibly lucky in Australia. Given our relative size, we really punch above our weight when it comes to the top-shelf spec fic writers we’ve produced. And, lucky for us, that small size means that our spec fic community is also pretty small and tightknit. Even for relative novices like me, due to the two-or-three degrees of separation it comes down to, it’s possible to meet some amazing people with truly international careers if you go along to some of our genre conventions.

It’s not just that, though. Don’t get me wrong, it’s definitely thrilling to sit next to someone like Trudi Canavan in a pub, or be on Kate Forsythe’s team at a spec-fic romance gauntlet, or to be chauffeuring someone like Alisa Krasnostein between the airport and the hotel. But I have made some great friends with writers in Brisbane, Adelaide, Perth, Hobart and even further afield through Conflux. Which is one of the reasons why I put my hand up to help out this year. I love that somewhere as small as Canberra is able to offer up something as wonderful and jam-packed with opportunity as Conflux.

Plus, going back to the theme of community, as Conflux is entirely run by volunteers, everyone who’s involved is there for the love of it. Which makes the Conflux committee its own little community of awesomeness. Which is why I’ll be putting my hand up to help out again next year. 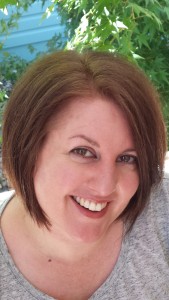 Leife Shallcross lives in Canberra, Australia, with her family and a small, scruffy creature that snores. She reads fairy tales to her children at night, and then lies awake listening to trolls (or maybe possums) galloping over her tin roof. Her work has appeared in Aurealis and several Australian and international anthologies, including the forthcoming CSFG anthology The Never Never Land. She is actively involved in the Canberra Speculative Fiction Guild and is the current president. When writing is not consuming her spare time and energy, she plays the fiddle (badly). She can be found online at leifeshallcross.com and on Twitter @leioss.