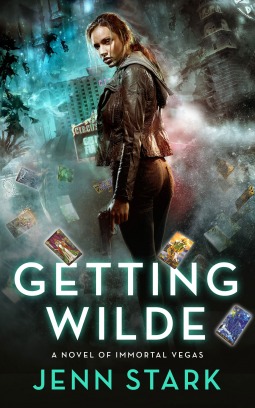 Using her well-worn Tarot deck, magical-artifacts hunter Sara Wilde can find anything–for a price. And the price had better be right, since she needs to finance her own personal mission to rescue several young psychics recently sold on the paranormal black market.

Enter Sara’s most mysterious client and occasional lover, the wickedly sexy Magician, with a job that could yield the ultimate payday. All she’ll have to do is get behind Vatican walls… and steal the Devil himself.

But play with the Devil and you’re bound to get burned.

Pressure mounts for Sara to join the Magician’s ancient and mysterious Arcana Council, as militant forces unleashed by even darker powers seek to destroy all magic–including the young psychics Sara is desperate to keep safe. The Council may be their only hope. . . but it could also expose Sara’s own dark past.

From the twisting catacombs of Rome to the neon streets of Vegas, Sara confronts ancient enemies, powerful demigods, a roiling magical underworld about to explode… and immortal passions that might require the ultimate sacrifice. But oh, what a way to go.

No matter how the cards play out, things are about to get Wilde.

Getting Wilde sits squarely with the urban fantasy genre. Sara Wilde is a typical wise-cracking Strong Female Character and it doesn’t take long before she starts ass-kicking as well. She has some magical ability, chiefly expressed through tarot cards, which she uses to negotiate through the dangers of her profession. I didn’t like Sara at first. There’s a fine line between wise-cracking and just plain rude that she didn’t quite manage in the beginning.

On the other hand, I can’t blame her in some respects. For someone so concerned with manners, Armaeus Bertrand seems to have remarkably few of them himself. He’s happy to use his telepathy to pry into Sara’s mind whenever he can and consent doesn’t seem to be something he’s overly concerned with. There are times he seems to genuinely care for Sara and other times when he treats her like a particularly fascinating puzzle rather than a person. If you like Alphas in your romance, this is a book for you.

That’s not really my thing, but I did come toenjoy the book quite a bit. Once Sara stopped sniping at Armaeus and started concentrating on staying alive, I started to like her a whole lot more. The tarot angle was rather novel and it was nice to encounter an urban fantasy that didn’t deal with werewolves, vampires or angels. It also had a bit of diversity in the setting; rather than being wholly set in the US, a substantial chunk of the book takes place in Paris and Rome.

Speaking of diversity, the book also features Nikki, a transgender woman who turns out to be one of Sara’s most reliable allies. Nikki does tend a bit towards the camp–she does love her spangles–but this is Vegas, after all. She also shows some depth as her past comes to the fore and her friendship with Sara deepens. By the end, I think she was my favourite character.

There were some dark elements. Quite aside from the matter of dubious consent, the book also touched on human trafficking and dismemberment. I didn’t find it disturbing, but it may not be for everyone.

Another element that also may not be for everyone is the love triangle (with the distant possibility of a quadrangle) that the story seems to be heading towards. As the series is just getting started, there’s much still unresolved. The conclusion was satisfying but left off on a killer cliffhanger.

Overall, while it had some dark elements, I found Getting Wilde a fun read that doesn’t take itself too seriously.