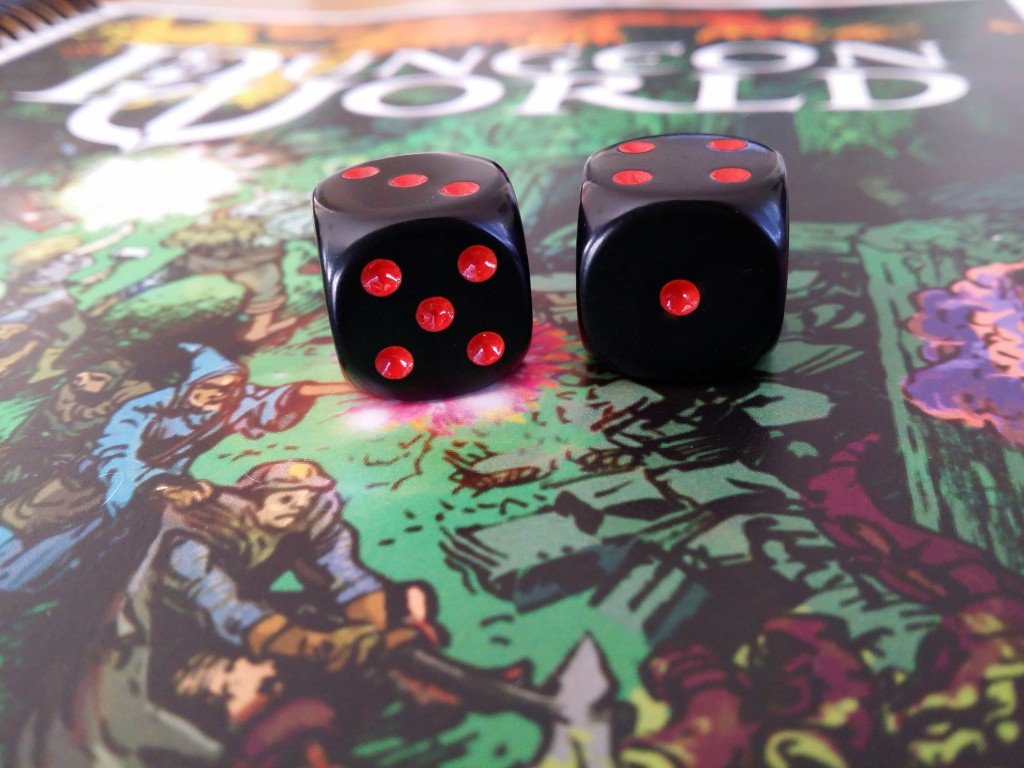 In my review of Rat Queens, I mentioned that I’m a tabletop RPG geek. So I was absolutely thrilled when I saw this last month:

Yes, it’s true, I’m writing a Rat Queens RPG with the assistance of @skinnyghost and the guts of @Dungeon_World.

Let me tell you why this is awesome news. A warning: this is going to get fangirly.

Reason being Dungeon World is my current favourite RPG. Like most RPGers, I started out roleplaying with Dungeons & Dragons. I stuck with it for thirteen years. Then, at the beginning of last year, my gaming group started branching out into newer systems. This is a direct result of our GM discovering RollPlay on YouTube. The channel hosts several tabletop RPG campaigns that are played and recorded online. One segment particularly caught our interest: Research and Development. Every 6-8 weeks, the Game Master and a core group of three players would invite a guest to join them in playing a different RPG. And thus we found Dungeon World.

Like D&D, Dungeon World is a fantasy roleplaying system. However, the two systems have some significant differences. Dungeon World is designed to have a stronger focus on roleplaying and story-telling. As such, there are fewer rules and those that are there are intended to promote a more fluid, creative style of play. This sort of system works well for a Rat-Queens-inspired adventuring group. A complicated manoeuvre such as the one Betty, Dee and Violet pull off against the troll that ambushes them would require a complicated series of dice rolls in D&D. This slows down play and the numerous rolls make for a higher chance of failure. In Dungeon World, it is reduced down to just a couple of rolls, giving the players plenty of space to narrate their awesomeness.

Should a Dungeon World player fail one of these rolls, they get the consolation of gaining experience points. I love the philosophy behind this: that we learn from our mistakes, not from wholesale slaughter. This means that the focus shifts from simply killing monsters (and sometimes people) to a character’s personal development, and makes for a much more rewarding game from my story-loving perspective.

The simplicity of the rule system makes it a great introduction for beginners. My group consists of three experienced RPGers and one newbie who came from a computer gaming background. One adventure in and you’d never guess that we hadn’t been playing the system for years, let alone which one of us was the newbie. This is especially surprising because our newbie chose to play a spellcasting class, which traditionally have been the hardest to wrap one’s head around. So if Rat Queens has inspired you to try RPGs, Dungeon World is an great place to start and it will make an excellent base for a Rat-Queens-specific RPG.

Moving away from the system, the other reason that Kurtis Wieber’s tweet is such good news is his co-author. @skinnyghost is the Twitter handle for Adam Koebel, one of the creators of Dungeon World. I also came across Adam through RollPlay, where he runs a sci-fi space epic called Swan Song and an 80s-flavoured cyberpunk called Mirrorshades (which is probably my favourite RollPlay show). As you’d expect of a RPG designer, he lives and breathes games. But what makes him a perfect creator for a Rat Queens RPG is his inclusivity. In D&D terms, he chooses a chaotic good alignment and asks the fans on his forums to do the same:

We are anti-sexism, anti-racism and anti-homophobia.

We punch up, not down.

We believe in discussion, not argument.

Even though human consciousness might be a cosmic joke, we’re respectful and decent to one another.

We don’t make fun of people for what they love.

We hold each other accountable for this stuff.

Adam is queer himself and always makes an effort to include a diverse range of characters in the games he runs. This makes me confident the diverse content of Rat Queens will be treated with respect and appropriately incorporated into the new RPG.

If you’re into RPGs, either as a player or as a GM, I highly recommend Adam’s RollPlay segment with Steven Lumpkin on GMing called Being Everything Else. It covers topics such as the role of narrative in RPGs, where to get inspiration as a GM and introducing new players to roleplaying. He also has a fantastic discussion of player vs player dynamics on Roll20’s YouTube channel.

Needless to say, I think the Rat Queens RPG is in very good hands and I can’t wait to grab a copy when it’s done.

I’m also curious to see whether this will start a rush of new players among the people I know. What about you? Is a Rat Queens RPG something you’d be interested in playing?