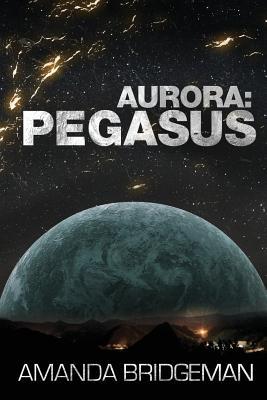 Disclaimer: This review may contain spoilers for previous volumes/books.

Captain Saul Harris of the UNF Aurora gets the call he does not want to receive. Forced to pull his team back together and go hunt down and capture old enemies, he finds himself faced with a whole new terror. He thought the Darwin mission was over, but all those unanswered questions are beginning to haunt him.

Corporal Carrie Welles has no choice but to rejoin the Aurora crew and help her captain finish what they started. But is this mission as straight forward as it seems? Is she really prepared for the fight of her life?

Aurora: Pegasus is a bit of a different beast to its predecessor. Classic sci-fi/horror in the vein of Alien has been traded for a more character-driven story that spreads out the action over a greater number of locations. Given I’m not really a horror fan and usually love stories that focus on character, I was surprised to find I didn’t enjoy Aurora: Pegasus quite as much as the previous book.

Some of this was due to personal taste. I’ve mentioned before that I don’t like seeing characters humiliated. A little bit is bearable, but Corporal Welles has it heaped on her by friend and foe. The former was especially difficult to witness, when throughout the story Welles constantly shows herself to be capable and loyal. She was a character I could empathise with and while her stubborn streak was occasionally discomforting, it was also something I could admire.

In terms of the characters, the book does a good job of building on the foundation created by Aurora: Darwin. Like most human beings, the majority of the Aurora‘s crew strive to do what is right but they don’t always make the best choices. The flaws of the entire cast begin to emerge.

Unfortunately, I found the story somewhat predictable. Characters were slow to reach obvious conclusions. I also felt the villains were undercut. It is hard to say more without giving away spoilers, but I felt they didn’t present as convincing a threat as they did in the previous book, though they certainly get up to some horrible things. This led to a bit of a lack of tension for me, though the internal squabbles among the crew of the Aurora counterbalanced this somewhat.

The pace of the last quarter was slow. This was in keeping with the stronger focus on character but overall I thought it would have served better as the introduction to the next instalment.

Having said that, the ending left me teary and did what it was supposed to do: hook me in for Aurora: Meridian.

One thought on “Review – Aurora: Pegasus by Amanda Bridgeman”