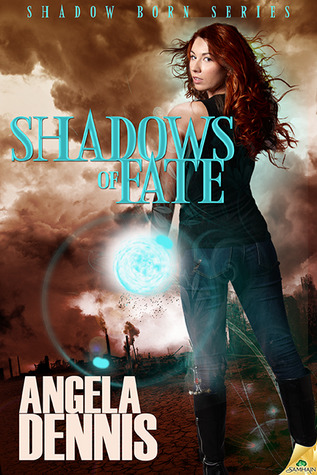 After being accused of her husband’s murder, Brenna Baudouin is banished to Earth for a hundred years. This plane is struggling under an influx of demons, and Brenna makes her living as a state-sanctioned demon hunter. Being the only Shadow Bearer on this plane has its challenges, but Brenna has made friends and moved on with her life. Until Grey Warlow, another Shadow Bearer, arrives on the scene. Brenna is less than happy about her new partner but they must work together to solve a series of murders and prevent demons overrunning Earth.

This book didn’t start off on the right foot for me. There were a couple of worldbuilding infodumps and the description was a bit overwrought at the beginning. Once it settled down, it was good fun. The action sequences were well-handled and nicely paced, serving to draw me deeper into the story and providing some cinematic moments.

Brenna was cast from a fairly typical Strong Female Character mould, showing herself to be a badass early on in her early fights with the demons and curt when Grey arrives on the scene. It was fun but edging toward irritating before her family-of-choice were introduced, allowing us to see what she’s like with people she really cares about. This also made a nice contrast to her relationship with her family-by-blood, the people responsible for her husband’s death and her subsequent banishment.

Brenna’s position as a Strong Female Character gets progressively weakened as the story continues. As Grey becomes more domineering, Brenna slips into passivity and a more empathic, healing-focused role. I was glad to see her redeem herself somewhat towards the end.

In the second half of the book the pacing became somewhat uneven. Brenna and Grey’s relationship stagnates while big plot events get jammed in without the space to do them justice. The family-of-choice thread is rather disappointingly subsumed by everything else that’s going on.

However, overall I found it a light and entertaining read. There were some interesting worldbuilding elements (a Fall without angels was a refreshing take) and the characters were generally fairly likeable–I was particularly intrigued by Lucy, the gargoyle receptionist. I’ll be keeping an eye out for the next in the series.