You are here: Home > Review: Running Deer and Hidden Badger by K.D. Sarge 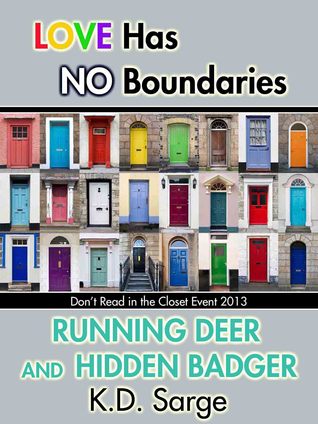 When Cal comes home from his first year at university, he discovers his family’s Texan ranch is in dire straits and that his mother has hired a handsome city boy called Joseph to help out. Like Amy Rae Durreson’s The Court of Lightning, this novella was written for the Goodreads M/M Romance Group’s annual challenge. It is a sweet romance with no sexually explicit content.

There was a lot to like about Running Deer and Hidden Badger. Joseph’s character is of Native American descent but is out of touch with his heritage. Instead of playing on the stereotype of the wise Indian deeply connected to Nature, Joseph is from Los Angeles and knows nothing about the expansive Texan landscape. He can barely ride a horse and Cal has to teach him the business of ranching from the ground up. Although it seems a bit of a stretch that Joseph doesn’t even know what a scorpion looks like, I was pleased that the story didn’t fall into the trap of racist typecasting I might have expected from the title.

Sarge also makes sure her Texas is firmly in the modern era. The ranch hands all have mobile phones for emergencies, Joseph has an interest in digital photography and Cal speaks to his (soon ex-) boyfriend via Skype. The ranch remains fairly isolated but it is nice to see there was no pretense that these technologies don’t exist.

The story itself is a lot of fun but has a few flaws that make me suspect there was a shortage of time and word count. The focus is very much on Cal and his family. While there are some strong hints about Joseph’s backstory, they are never followed up. This vagueness and the lack of stage time given to Joseph’s past leaves the novella feeling somewhat unbalanced.

Similarly, there are a lot of threads that are dropped as the story progresses. The opening suggests that racism might be a key issue and a particular threat to Joseph. However, after the opening that threat disappears entirely. Likewise, Cal’s boyfriend disappears with hardly a whimper, making it difficult to see why he was included in the first place. Instead of adding to the story, these shadow threats only serve to weaken it. The final confrontation needed more building up and I found the conclusion very abrupt.

Despite these flaws, I still enjoyed Running Deer and Hidden Badger. The characters were endearing and Sarge did a wonderful job of bringing the Texan landscape to life. I also very much appreciated the way she wears her fandom on her sleeve, with references scattered throughout the story. There’s a horse named Rincewind (after the wizard from Terry Pratchett’s Discworld series), a property called Nine Tails (a reference to the Naruto anime) and Joseph uses the Tenth Doctor as a reference point for describing Cal to his mother. Overall, it was a nice, light romance that made my inner geek chuckle.

Loose-leaf Links for December
My Favourite Reads of 2014