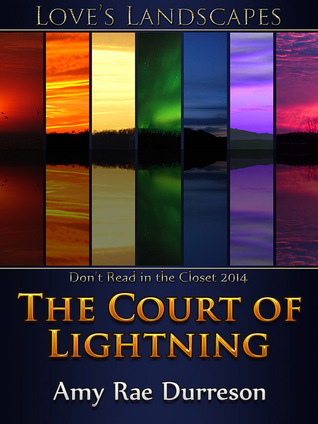 This story was written for the Goodreads M/M Romance Group‘s annual challenge. My first encounter with the work of Amy Rae Durreson was via The Lodestar of Ys, written for last year’s challenge. I was very impressed and was therefore very much looking forward to The Court of Lightning. Overall, it mostly lived up to my expectations. Durreson does a wonderful job of taking the challenge prompt she’s been given and spinning something totally unexpected out of it. Her world-building is top quality, putting to shame some fantasy novels I’ve seen in print. She weaves magic and politics into something complex and vibrant.

Her character work is also excellent. The friendship between Arashan and Tirellian is at once comfortable and awkward, not always able to bridge the gap between extrovert and introvert. Shyness is shown not just as an endearing character trait, but one that inhibits and is struggled with. Her soldiers suffer from shellshock and the effects of the terrible lives they’ve had to lead. There is some explicit sex, but it is never out of character and does not overwhelms the plot.

My one criticism is that there was just a little too much jammed into the story. The Court of Lightning is around 6 000 words shorter than The Lodestar of Ys and I felt it could have used the extra length. The pacing felt ever so slightly off. Being a sweet romance, I would have liked a bit more of the romantic relationship between Arashan and Tirellian when it wasn’t being overshadowed by life-threatening danger, awesome though that was.

All-in-all, an excellent read and well worth the time. A few loose ends have me suspecting that we’ll see more stories in this universe from Durreson and I very much look forward to them.